I have been a teacher of English for 24 years, a Headteacher for 9 years and, at the age of 48, this much I (don’t) know about the future of ICT in schools.
We all know the Wayne Gretzky quotation, Skate to where the puck is going, not to where it is. The trouble is, I don’t know if we have the capacity to get ahead of the curve when it comes to the use of ICT in schools.
When I began teaching I had to use a Banda machine to repro hard-copies of poems we were studying. That puts into question whether I can ever really appreciate the potential of ICT to transform learning. (See below for an explanation of what a Banda machine was…)
Learning how to use software isn’t that hard anymore because it’s all so intuitive. I have only been on one proper ICT course – a whole weekend away somewhere in deepest Bognor Regis in 1989 learning how to word process on BBCs. It was a long weekend, but no Bank Holiday.
Programming and App creation are the future, apparently. I have no experience whatsoever of programming, except that our sixth form tutor group room was the sole computer room and I used to program on each computer: 10: The Clash; 20: go to 10; which pasted The Clash right across the monitors, much to my delight and my form tutor’s irritation. I feel like Peter Mannion in The Thick of It when it comes to Apps…
[wpvideo ZXp8JQzF]

We must resist going backwards when it comes to ICT. The elements of the proposed new National Curriculum which appear, at first glance, to be relatively traditional can easily encourage similarly traditional pedagogic approaches. We have to vary our pedagogy and that means engaging authentically with the new technologies. Whilst I feel like Peter Mannion, there are generations of young people who have known nothing but the sheer magic of Bluetooth.
I am constantly amazed at the creativity of youngsters. We spent a whole evening when we were in Scotland at Easter round the dinner table listening to my son Joe and his mates trying to invent the one App which would make them all millionaires. The best they came up with was the Ripoffter Scale TM App. You enter the name of the product and the price at which it is for sale and the App measures that price against all the other available prices for that product nationally. The more you are being ripped off, the more violently the phone shakes. I’d had a couple of single malts and was ready to ring the Intellectual Property Office there and then…
Twitter and Blogging have revolutionised my professional world, as they have for many people in education; Tom Sherrington feels similarly to me as do hordes of others. Michael Gove made a speech name-checking tens of educationalists, many of whom are known for their on-line presence. @oldandrewuk has never known such fame, ironically.
Chris Waugh @Edutronic_net is courage personified when it comes to encouraging students to engage with learning in their media. Visit his website and have a look around – it’s fabulous! Mark Anderson @ICTEvangelist and Martin Burrett @ICTmagic are similarly brilliant. And old friend Tony Parkin @tonyparkin stays as  young as ever on his diet of personable ICT conversation.
Sir Mark Grundy at Shirelands Academy seems to have got it right when it comes to ICT. If you ask him he’ll say that it there is no quick-fix when developing the effective use of ICT in schools; rather it is about creating a medium to long term plan and modifying the plan regularly as technology develops.
I am interested in Salman Khan’s notion of the flipped classroom, explained graphically here, as well as in the video below. On Newsnight this week they featured the Khan Academy and interviewed Anthony Seldon who said, I think we are just beginning to see in education the beginning of the biggest revolution since the printing press. And that’s my concern; we have the next three years of development at Huntington pretty well planned out, but we need to be planning for the generation of students beyond the next one, way after I’ve finished my work here.
[wpvideo vSNpfQDW]

I worry about schools which are buying i-Pads for everyone. If you have ever gone out to eat in a group including several teenagers, once the food has been eaten – and sometimes before it has even been served – they tend to default to a single screen each rather than converse.
I’m not a big fan of the Ready-Fire-Aim approach to implementing change. When our English and Media department wanted to implement an i-Pad strategy @HuntingEnglish and @KRE_ativity put together a compelling case for their proposal which is rooted in pedagogy. @HuntingEnglish has reflected several times on the success of the i-Pad initiative in the English Department at Huntington and there is reasonably good evidence to suggest that our students’ learning in English has benefitted from the technology. And, guess what? They bought just 18 i-Pads, which has meant the students have to share and subsequently talk to each other.
I love the increasing emphasis on evaluating impact on students’ learning through evidence-based research. We spend £170,000 p.a. on ICT at Huntington and I am determined to find evidence which will tell me whether that has resulted in £170,000 worth of impact on students’ learning.
We ban students’ mobiles on site, period. When our students cross the threshold into school at 8.30 am every Monday morning it must be like walking into a world from before they were born. During our last reduced-tariff inspection a temporary, highly-gifted Drama teacher was observed; he didn’t know the rules about mobiles, let the students film each other so they could discuss their acting skills whilst watching themselves replayed on their phones, and it was the only lesson of the eight observed which was graded outstanding. Funny.
Do we need a VLE/MLE, when we have Dropbox, WordPress, E-mail and remote access for parents to their children’s data? James Bowkett @James_Bowkett certainly doesn’t think so.
Get the right software/technology. We tried putting all Homework online via a Moodle VLE. It wasn’t very good, to be honest, and possibly had a detrimental effect on both the setting and completion of homework. After a year we took a vote as to whether we should continue to post homework on-line or not; we voted overwhelmingly to scrap it. Trouble is I think it was the right thing to do, but the wrong technology.
I know the key principle: ICT is a just another tool for learning and students need to have the option to use whatever ICT they might need in order to further their learning. It still doesn’t help me draw up a vision for ICT which I think we can deliver. But I bet I’m not the only Headteacher who feels like this. We have an ICT curriculum developer; we have a healthy looking audit of ICT usage across the curriculum; even I use Prezi, Tagxedo, blogging and Wordle in my own teaching. I still feel, however, we are not providing a modern learning experience for our young people.
I’m a good strategic thinker, but maybe not where ICT in schools is concerned. I feel like I am missing something. If our core purpose is to inspire confident learners who will thrive in a changing world, I feel we ought to get skating, fast!
Oh yes, the Banda machine: best read about it here. Note the emphasis upon the low quality of copying. They were functionally pretty useless, but the paper copies smelt heavenly! 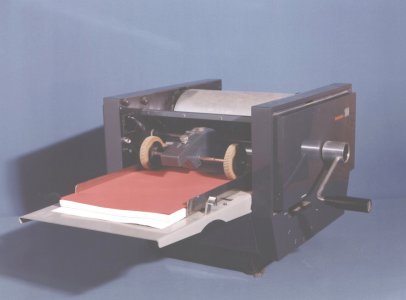