I have been a teacher for 25 years and, at the age of 49, this much I know about being taught/how I learnt to teach.
Any student can learn how to punctuate through creative writing. That’s a parody, to an extent, but it has more than a grain of truth in relation to the core philosophy of Peter Abbs’ book English Within the Arts. Peter is a deep thinking, fiercely intelligent academic who helped inspire me to write poetry. He taught in a school for three years in the mid-60s and took up his first academic position as a research fellow at the University of Wales in Aberystwyth c.1968. We loved the way he talked: once he wanted us to sit in a semi-circle to watch a video and he said, “Come and sit in a crescent shape…you know, I just can’t stop talking symbolically!” Peter was our English PGCE tutor at the University of Sussex, 1987-88.
I was observed once in my first year. I taught an incredibly tedious lesson where I presented an hour-long slide show – pre-Powerpoint proper photographic slides – on Chaucer to a lower sixth A level literature group; the Local Authority English advisor thought it was “fine”. I subsequently passed my probationary year and was next observed six years later.
I learnt a simple teaching/learning process intuitively. My first ever lesson as a qualified teacher was based on Edward Thomas’ poem “As the team’s head-brass”. If you read nothing else today, read this poem…
AS THE TEAM’S HEAD-BRASS
As the team’s head-brass flashed out on the turn
The lovers disappeared into the wood.
I sat among the boughs of the fallen elm
That strewed the angle of the fallow, and
Watched the plough narrowing a yellow square
Of charlock. Every time the horses turned
Instead of treading me down, the ploughman leaned
Upon the handles to say or ask a word,
About the weather, next about the war.
Scraping the share he faced towards the wood,
And screwed along the furrow till the brass flashed
Once more.
The blizzard felled the elm whose crest
I sat in, by a woodpecker’s round hole,
The ploughman said. ‘When will they take it away? ‘
‘When the war’s over.’ So the talk began –
One minute and an interval of ten,
A minute more and the same interval.
‘Have you been out? ‘ ‘No.’ ‘And don’t want to, perhaps? ‘
‘If I could only come back again, I should.
I could spare an arm, I shouldn’t want to lose
A leg. If I should lose my head, why, so,
I should want nothing more…Have many gone
From here? ‘ ‘Yes.’ ‘Many lost? ‘ ‘Yes, a good few.
Only two teams work on the farm this year.
One of my mates is dead. The second day
In France they killed him. It was back in March,
The very night of the blizzard, too. Now if
He had stayed here we should have moved the tree.’
‘And I should not have sat here. Everything
Would have been different. For it would have been
Another world.’ ‘Ay, and a better, though
If we could see all all might seem good.’ Then
The lovers came out of the wood again:
The horses started and for the last time
I watched the clods crumble and topple over
After the ploughshare and the stumbling team.
(If we could see all all might seem good – what a wonderfully challenging line for a 16 year old to grapple with! And read Seamus Heaney’s response to Thomas’ poem here.)
I explained the context of the poem. I read it aloud to the students. I explained a small number of crucial aspects of the poem. I asked them to work in threes to identify the three voices in the poem and to prepare a reading for the rest of the class. I then asked them to identify ten questions about the poem they wanted answering, pared the suggestions from the class down to a single set of ten questions and asked them to attempt to answer those questions for homework. Next lesson I went on to support them in writing their first A level literary criticism essay. The sequence of that first lesson isn’t a mile away from David Didau’s teaching sequence for developing independence. 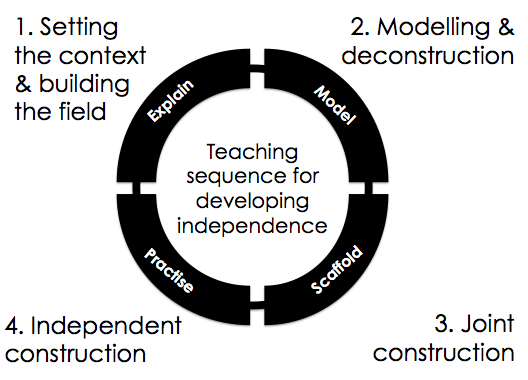 In the past two years all my certainties about the teaching process have begun to crumble. I thought I knew how to teach. I thought I knew how children learn. Now I’m not so sure. And I’m not so sure because I’m thinking much harder about the whole learning process through meeting the likes of Tom Bennett and David Weston. These incredible educational thinkers have challenged not just me, but the whole profession, to reflect upon what we are doing in the classroom and how, to use Dylan Wiliam’s now famous phrase, every teacher needs to get better.
Do you trust your own experience or look to educational research to establish what works best in the classroom? That’s one of the questions we’ll be exploring at next weekend’s NTEN/ResearchED conference in York. The line-up’s pretty damned good – get your ticket here before it’s too late!