I have been a teacher for 25 years, a Headteacher for 10 years and, at the age of 49, this much I know about where my poetry comes from.
If you listen carefully, people’s stories can be the raw material of poetry. This sonnet I wrote twenty-five years ago derived from my friend Kate’s recollection of her father and his ink pen, told to me as we drove to work together.

His choice of pen remained the same

To signing his headmaster’s name –

A Waterman in mottled beige.

The cursive blacksmith’s art had honed

The ink-filled gold into a tool

For use by him and him alone –

His hand made them inseparable.

Gold outlasts all.  The pen was left

A legacy, bequeathed to her

Whose writing pleased the family most:

But straining through the unknown curves

It snapped, to leave the nib’s new host

Sometimes my poetry radar is activated without any warning whatsoever. Last week, just as I was leaving work, I got chatting to John, one of our Site Supervisors. Fishing is our common bond: he told me about how, when he had crossed the mist-shrouded River Ouse early that morning, he was reminded of his dawn-start fishing trips with his dad fifty years ago. His reminiscences were a sonnet waiting to be written.

His old man crossed the landing to his room

And, careful not to wake the eldest son,

He whispered to the youngest through the gloom

The needless exhortation, “John, come on.

They rode unnoticed through the early dawn;

A getaway on bikes along York’s streets

Sat with his dad beneath the fading moon,

Were when he learnt the expert angler’s art:

When to strike, how to read the river’s flow –

Such things that only fishermen can know.

I toyed with Lineage as the title, but I think Fishing Lines is subtler. I worked really hard on making the octave and the sestet merge into each other, mirroring the relationship between his memories of the past and the present. Originally the first three lines of the sestet saw June rhyme with summer’s bloom, but that didn’t quite work and clashed with the room/gloom rhyme of the octave. When I worked on the June/moon rhyme suddenly it all came clear; a great example of form establishing meaning. I was reminded of Billy Bragg’s line in Tank Park Salute, his song to his father:

Some photographs of a summer’s day

A little boy’s lifetime away

Is all I’ve left of everything we’ve done

Death gazes down as I pass by

To remind me that I’m but my father’s son

John and I also agreed that the poem reminded us of the Mr Crabtree cartoon strip from 1949. A couple of the images from the strip on Google are remarkably apposite! 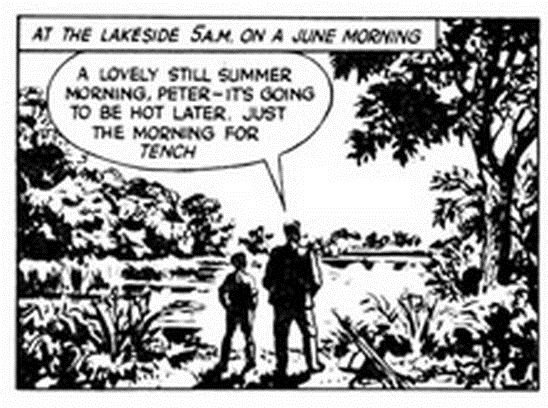 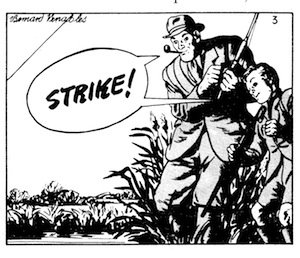