I have been a teacher for 25 years, a Headteacher for 10 years and, at the age of 49, this much I know about Michael Gove’s departure.
Michael Gove could have won me over. Back in early 2013 he was asked at a National College event whether he had won over the hearts and minds of Headteachers and he replied something like, Well, I’ve made some progress, but I don’t think I’ve won over Heads like John Tomsett… He was only partially right.
For all his renowned intellect, Michael Gove didn’t seem to have the nouse to understand that people can hold contradictory views simultaneously: I am co-leading an EEF Randomised Controlled Trial into the efficacy of research in schools, but I have also authorised the teaching of a new Happiness course to Year 10 from this September which has no evidence base supporting it whatsoever. The thing is, there are a number of key educational issues upon which Michael Gove and I agree. His problem was that I didn’t agree with him upon every educational issue. And as I wasn’t entirely with him, I must have been, in his eyes, against him. I was an Enemy of Promise. I was a paid up member of The Blob. I was a bad Headteacher, as he implied in an interview with Allegra Stratton recently…

I have quietly bemoaned the decline in academic rigour of the English Literature A level examination over the last thirty years. In 1982 I studied, amongst others, these challenging texts from the English literary canon: Eliot’s Mill on the Floss, Hardy’s Return of the Native, Chaucer’s The General Prologue and The Wife of Bath’s Tale, Synge’s Playboy of the Western World, Shakespeare’s Antony and Cleopatra and Love’s Labour’s Lost, Seamus Heaney’s Selected Poems 1965-1975, all examined in closed book, three hour, terminal examinations, sans coursework. I still recite the opening scene of Antony and Cleopatra to anyone who will listen. Heaney himself loved my annotations when he signed my A level copy of his poems last year. 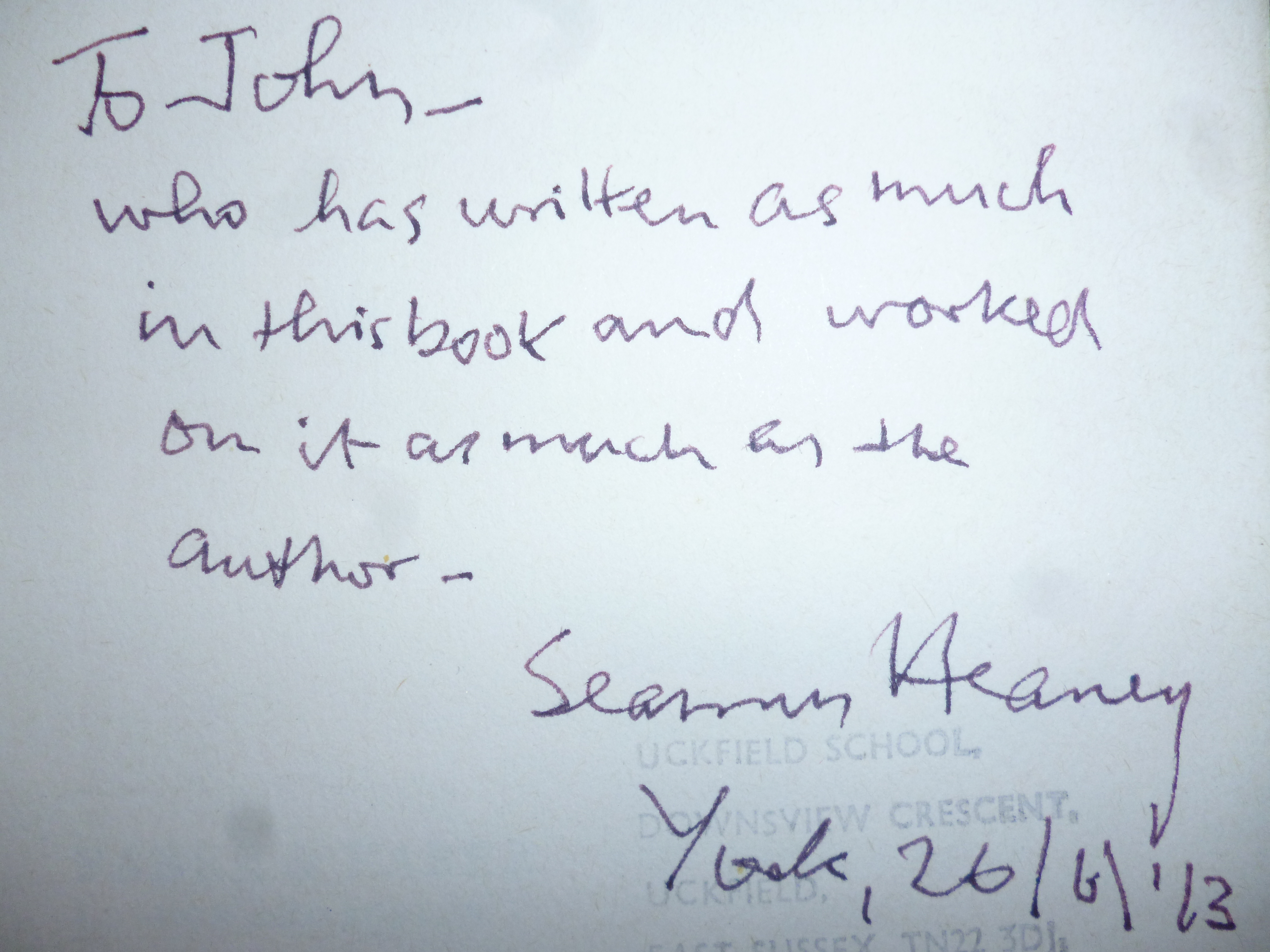 When I began teaching A level literature my aim was to teach my students to be active readers of literary texts and to understand the delicate but essential relationship between form and content. Somehow, the study of literature at A level has morphed into a formulaic exercise best exemplified by the quite appalling  Aspects of Narrative unit of the current AQA course. It’s not our students’ fault; they can only study what they are presented with. No, the decline in rigour is down to a whole range of factors, including the dire consequences for all of us should our students fail. You see? Michael Gove and I both know things aren’t like they used to be!
Michael Gove and I love international education systems. For the past four years we have offered the International Baccalaureate Diploma whose English syllabus is as close as you’ll find to my A level of three decades ago. Trouble is, as post 16 funding cuts have begun to hurt school sixth forms, we have just seen our last, very successful, cohort of IBD students finish the course; from September, for purely financial reasons, we’re back to A levels only. (Since I published this post ten minutes ago, it has been announced by the DfE that funding for the IBD will be enhanced by £800 per student…too late for the state school students in the north east corner of York. A cynical move with electoral motivations? I could weep.)
I admired Michael Gove’s courage to oversee the first fall in GCSE and A level pass rates for two generations. I remember being in a Local Authority Headteachers’ meeting in 2009, when Ed Balls, then Secretary of State for Children, Schools and Families, had declared that on the twenty-odd KPIs he had defined for schools to measure our performance, we were not allowed to set targets for next year which were lower than the previous year’s targets. I exploded, to the discomfort of all present, exclaiming, We don’t work with wood and steel, we work with human beings! When did we start living in a Stalinist state?!
Whenever I have met Michael Gove, he has been politeness itself. The thing is, I’ve never been convinced of his sincerity or that he ever really listened to anything I, or my colleagues, have said. And I’m probably in the minority when I say I have never been entirely convinced that his championing of the deprived children of this land is wholly authentic. Remember, for the last four years he has been an influential minister in a government which was criticised recently by the Social Mobility and Child Poverty Commission in a report which concluded that, The statutory goal of ending child poverty by 2020 will in all likelihood be missed by a considerable margin, perhaps by as many as 2 million children. Furthermore, as Vic Goddard wrote, His dismissal of vocational qualifications was also extremely damaging to young people: I absolutely deplore his message that it’s better to be a doctor than a plumber and that you’re only valuable if you go to university. Sometimes he speaks as though he has no real sense of what faces the poorest families in our country today.

Michael Gove is a Shakespearean tragic hero in that his greatest strength was his undoing. His passion for education sometimes manifested itself as ideological arrogance. This one-time B-movie actor, comedian and journalist thought he knew better than thousands of experienced practitioners. In the end it was the ideologue, rather than the committed educationalist, who seems to have got him the sack.
Teaching is a mass employment profession. This is something Michael Gove forgot. There are 451,000 FTE teachers in the UK. You can only improve an education system by improving the quality of teaching, something difficult to do if, as the ultimate leader of those 451,000 teachers, you lose their trust.
If you want to achieve something significant, on a large scale, you have to take people with you, something Michael Gove just did not understand. In one of my earlier posts about preparing for an OFSTED inspection, I make this point about trusting my teacher colleagues: Headteachers need to trust their colleagues more than ever. At our school we deliver over 2,000 lessons each week; I cannot teach them all, so what I have to do is develop my colleagues in a safe school environment which allows them to thrive professionally and personally. It’s the only way to a decent OFSTED inspection. It’s the only way I will keep my job. If he’d followed my advice, Michael Gove might have kept his job too.