I have been a teacher for 26 years, a Headteacher for 11 years and, at the age of 50, this much I know about Being Mortal.

…no matter how much success you may experience in life, your eventual story – no offence intended – will be one of failure. Your bodily organs will fail, and you’ll die.

Life is first boredom, then fear.
Whether or not we use it, it goes,
And leaves what something hidden from us chose,
And age, and then the only end of age.

According to Oliver Burkeman, Writing isn’t…a matter of ramming information into someone else’s brain. It’s the writer and reader, side by side, scanning the landscape. The reader wants to see; your job is to do the pointing. In my experience this has never been truer than with Atul Gawande’s new book, Being Mortal. I read it on a single flight to the USA and its impact has been profound.
In Being Mortal Gawande explores how we best manage the last phase of our lives in an age when medicine can keep us alive well beyond the point where we would naturally expire. The immeasurable hurdles we face when very old or terminally ill are examined with a clarity I have never encountered until now. It is an especially poignant book for a man with a pacemaker like me!

We were married on 28 August 1988. The wedding reception was a blast! My wife’s octogenarian grandma, surrounded by every single member of her family, looked on as her eldest granddaughter danced all evening in celebration. Grandma went to bed that night and never woke up.
Grandma’s funeral was held in the same church where, just four days earlier, we’d been married. We cleared our own confetti from the pews. At the time it was truly terrible.
Yet, having had time to reflect over the years, we have often remarked, What better way to go? Grandma had lived over eight decades, saw her twin daughters and her first granddaughter happily married and spent her last conscious day on earth with the people she loved the most. And she didn’t suffer. But not everyone dies like that…
In the summer of 1984 I managed to secure a place at the University of York to study English. In late November I was sitting in one of Sid Bradley’s Anglo-Saxon slide show lectures when the college porter interrupted him and asked for me. There was a telephone call from home. I knew that dad was having his gall stones removed, but mother’s voice broke cancerous news.
I came home to Sussex and found dad propped up in bed. The surgeon had made an incision, took a quick look and sewed him back up again. There was nothing they could do. He was full of tumours. Dad couldn’t remember much about what was said but he knew he had about six weeks to live. He lasted ten.
It’s hard to remember exactly what happened that Christmas. Dad said he just wanted a few quiet weeks. He didn’t rage against the dying of the light; true to his character, he calmly accepted the inevitable. We bought him Christmas presents we knew he would never need. In marginal denial, I gave him a chunky woollen jumper.
We had no religion. We assumed dad would go straight to heaven, whatever that meant. A Methodist preacher popped in having heard our sad news. Mother explained our simplistic thinking about dad’s destiny; however, the preacher was unequivocal in his judgement that dad would not go to heaven as he hadn’t taken Christ into his heart. Mother was devastated; four of the last twelve weeks dad was alive she spent in hospital, having had to be sectioned.
Dad’s health declined rapidly. Once he dropped his fruit salad on the floor and proceeded to eat it off the carpet. We decided that I should return to York. He was deeply proud I’d made it to university and didn’t want his illness to affect my education.
I went back to university in the January. I don’t know why I did that now. I’ve done some pretty stupid things in my 50 years but that is one of the very few I truly regret.
Soon after I departed, dad jumped out of the bedroom window following a heroin-induced hallucination. He was admitted to the local hospital never to return home. He lasted another three weeks.
All my family except me were there the night before dad passed away. As he moved in and out of consciousness, family myth has it that he recognised my eldest brother and gave him one of his affectionate looks which said, You silly young fool! They left him asleep at 9.00 pm.
Early the next morning, on 6 February 1985, just after 1.00 am he died in a bed that was not his own, alone, aged just 57 years. I was in York, 250 miles away.

I was twenty years old when my dad died and until the age of 32, when we had my son Joe, the worst thing had already happened to me. I think that helped form who I am. As Hamlet said, there is nothing either good or bad but thinking makes it so. It might also explain why sitting, metaphorically, side by side with Gawande, his book has impacted so powerfully upon me.
Looking back now I would have liked to have asked my dad the questions Gawande asked his terminally ill father, before dad spent the last three weeks of his life in a hospital bed:

My dad was a modern stoic. We were obedient passives, in awe of medical opinion. When I asked mother why dad went into hospital she said, Your father was very poorly. It was taken out of our hands. The doctor made the decision. She wasn’t angry about it; it seems there was no choice. We accepted the professionals’ decisions without challenge.
If someone had discussed my dad’s final phase of life with him – like Gawande did with his father – he may have spent his last weeks at home surrounded by his family.
I know life is too short for regrets, but, after reading Being Mortal, I find myself wondering whether, if we had just talked things through together with a little more wisdom, I might have remained at home and shared dad’s final days.
My dad’s death, and my life, could have been slightly different. 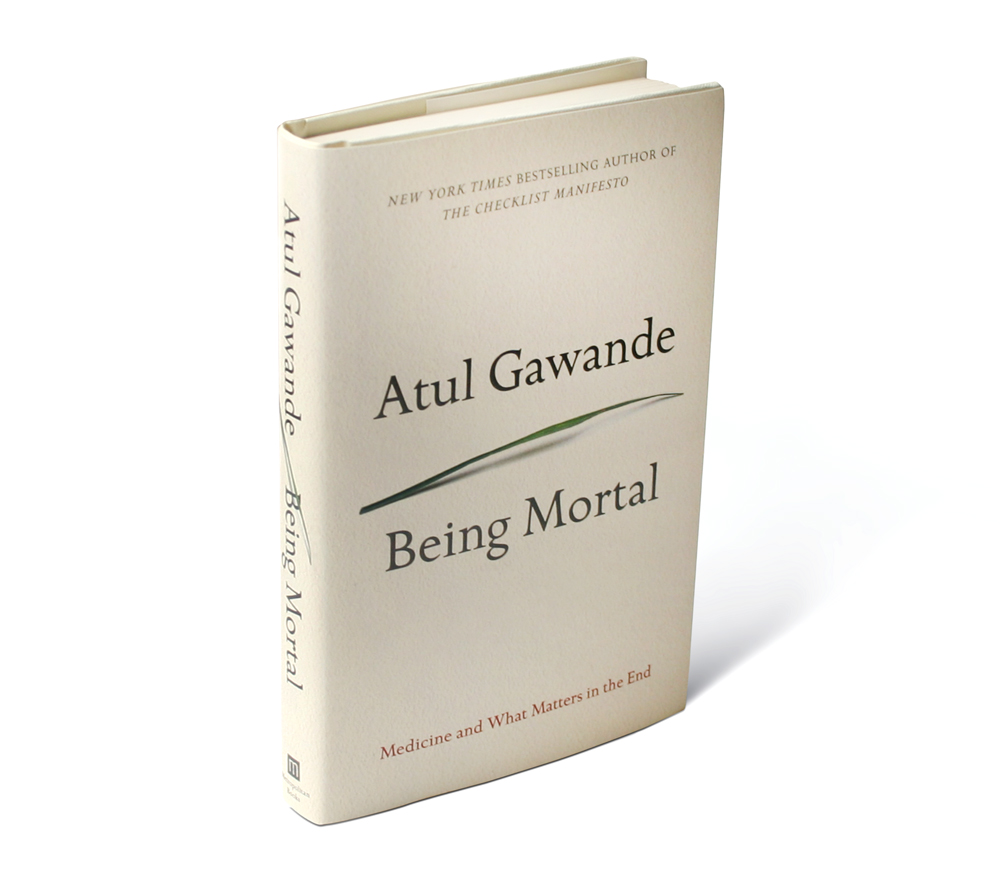