I have been a teacher for 26 years, a Headteacher for 11 years and, at the age of 50, this much I know about the challenge of becoming truly great.

I always think under par. You have to believe in yourself. – Sergio Garcia

Leaving school at 16 was a blessing in disguise. Struggling to make a living as a golfer taught me a number of life lessons. One thing which singled out the good from the truly great golfer was his attitude when a round was going well. If, say, you were a couple under par after ten holes, did you try to defend that score or did you go three under par, then four under then five? Defenders usually ended up blowing their scores, attackers usually won the tournament. In essence, the lesson I learnt is encapsulated by Jim Collins in his famous aphorism, Good is the enemy of Great.

Good or truly great? So what do you do when your RAISE and your LAT tell you the school is Sig+ for Attainment and Progress for all the main indicators with your RAISE a sea of green? The following resonates for me now more than it has ever done…

Written as a travelogue, Coasting describes Jonathan Raban’s single-handed 4,000 mile voyage around Britain which he made in 1982 in an old restored 32-foot sea-going ketch, the Gosfield Maid. His story takes various digressions, just as his journey does, as he mulls over his childhood as the son of a vicar in the Church of England, and the current state of Britain under Margaret Thatcher during the time of the Falklands War.

Chapter Two is a description of the dogged insularity of the Manx, whom he compares to the Falkland Islanders, whilst the Isle of Man becomes a metaphor for the insularity of the larger island on which he himself had been brought up and lived up until this point.

In the following extract he recalls an oft-repeated tale he hears told by the Manx fishermen.

When the Manx came to define their own national identity…they did so in entirely negative terms. What was so wonderful about being Manx? The Manx did not get above themselves.

In a fortnight of knocking about on the Island, I heard the same story three times. Each time it was told slightly differently and set in a different location, but in essence it was the same – a cogent, and depressing, statement of what it is to be an islander.

The scene is the quay at Peel, or Port Erin, or Laxey. A fisherman has just unloaded from his boat a shallow bucket full of crabs. All around the edge of the bucket, the crabs are showing their claws and trying to scramble out. A comeover* approaches the fisherman and tells him he ought to get a bigger, taller bucket, or he’ll lose half his crabs.

“Nay”, the fisherman says. “them’s all right. Them’s Manx crabs. As soon as one gets his leg cocked over the edge of the bucket, t’others all gang together and drag him down again.”

The story always ended in a wheezy burst of self-congratualtory laughter. To tell it was to demonstrate that you were a cynical Manx realist. It was a fine and flexible story. You could use it indiscriminately against Manxmen who talked about leaving the Island and going Across, against comeovers, against anyone who got ideas above his station, against anyone vain and ambitious enough to pursue an ideal of excellence which wasn’t recognised by the Island. The story in itself consituted a first-class argument for staying put and saying nowt. Either that, or be thought pretentious by the gang and get dragged back into the bucket. The tellers of the story always happily identified themselves with the gang.

*someone from the British mainland

Leading Huntington School we have a choice. Do we remain Islanders or do we have the courage to pursue an ideal of excellence which wasn’t recognised by the Island?

I reckon the world is for the discontented… 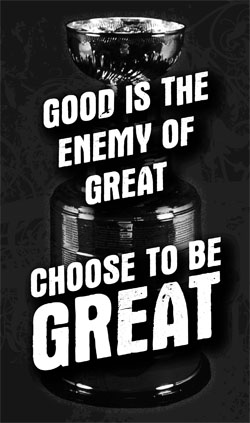 Or, from over a century ago (with thanks to Emma Ann Hardy)…

Be Not Content
Be not content — contentment means inaction;
The growing soul aches on its upward quest;
Satiety is twin to satisfaction;
All great achievements spring from life’s unrest.

The tiny roots, deep in the dark mould hiding,
Would never bless the earth with leaf and flower
Were not an inborn restlessness abiding
In seed and germ, to stir them with its power.

Were man contented with his lot forever,
He had not sought strange seas with sails unfurled,
And the vast wonder of our shores had never
Dawned on the gaze of an admiring world.

Prize what is yours, but be not quite contented.
There is a healthful restlessness of soul
By which a mighty purpose is augmented
In urging men to reach a higher goal.

So when the restless impulse rises, driving
Your calm content before it, do not grieve;
It is the upward reaching of the spirit
Of the God in you to achieve — achieve.