This much I know about…the North/South divide

I grew up in East Sussex , I have been a teacher for 27 years, a Headteacher in the North for 12 years and, at the age of 51, this much I know about the North/South divide.

It’s about the quality of teaching, stupid! I know of one Local Authority, the majority of whose students are in one of the worst performing ethnic groups (90%+ White British) who received a letter from OFSTED congratulating it on its schools’ 2015 KS4 outcomes and whose five 11-18 schools were all classed on the A Level Performance System (ALPS) as Excellent for progress at both AS and A level in 2015. That Local Authority is in the North, has 20%+ of its children living in relative poverty, is the seventh worst funded Local Authority in the country in terms of Direct Schools Grant, and only 20% of its secondary schools have academised. The two academies work harmoniously well with the other schools and relationships are not mired by a sense of corrosive competition. That LA is often asked, You are in Yorkshire and Humberside, the worst performing region in the country, and yet your secondary schools do so well – what’s your secret? Answer: The Local Authority’s secondary school leaders’ energies are focused almost entirely upon improving the quality of teaching. That Local Authority is York.

It’s grim up North. Here’s Her Majesty’s Chief Inspector’s analysis of the performance of schools in the midlands and the north:

The rich are getting richer and the poor are getting poorer. The national Deprivation Indices are updated every five years and here are the recently released details of the most impoverished Local Authorities:

And don’t go comparing the northern schools with schools in poorer areas of London; it’s a completely flawed comparison, as Professor Simon Burgess explains in his post Education and the London Effect.

Why not ’phone up Robin Hood and ask him for some wealth distribution? This graph picks out some facts about secondary school funding per pupil across Local Authorities, with Tower Hamlets’ secondary schools receiving nearly £3,000 more per student than secondary schools in York; equivalent to £4M more a year for a school similar to ours: 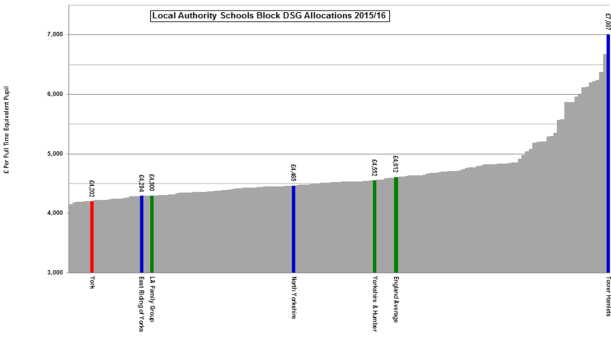 If you are performing so well, why do you need any more funding? I hear people ask. Well, having cut £662,000 p.a. off the budget since 2010, I have no idea what else we can do to make efficiency savings (BTW, efficiency savings are just another way of saying fewer people doing more). With the announcement of the end of the education services grant (ESG) made by George Osborne in the Comprehensive Spending Review things are about to get two teacher redundancies worse for a school like ours (£90,000 p.a.). The DfE website is so fabulously Orwellian in the doublethink nature of its announcement of this cut, that I almost feel pleased it’s happening:

Nudge politics. Newspaper paper headlines like the one below do the government’s job for them. If the government says often enough that all schools will be academies, the schools will academise without the government having to legislate. It’s clever stuff. If you bother to read to the end of the article, however, you’ll see Sir Michael makes the point that school type doesn’t matter. Structural solutions are a distraction. No concrete evidence exists that academisation makes any difference at all.

It’s complex. We have our difficulties in York, for sure. But are structural solutions the answer to underperforming schools? I have always worked unconditionally with neighbouring schools. We are stronger together. I’m sure I could be an effective Executive Headteacher, or CEO of a Multi-Academy Trust, if I had to be. I don’t really mind if we are an academy or not, to be honest; the thing is, I don’t think it makes any difference. Good leadership and an unerring focus upon creating the conditions for truly great teaching to thrive are all that matter….oh, and as a fully-paid up member of the Enemies of Promise Club, espouser of the soft bigotry of low expectations, I reckon that inconvenient White British poverty issue makes a difference too

Headteacher in York. All views are my own.
View all posts by johntomsett →
This entry was posted in General educational issues, School Leadership. Bookmark the permalink.