I have been a teacher for 27 years, a Headteacher for 12 years and, at the age of 51, this much I know about my missed opportunity with David Beckham.

Our lives are defined by opportunities, even the ones we miss.
Eric Roth 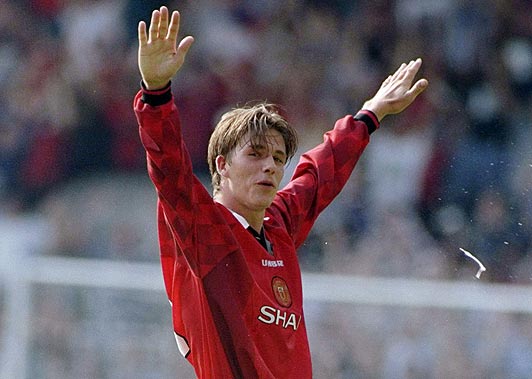 I come from the south coast, so supporting Manchester United is obligatory. I like the old joke, “How many Manchester United supporters does it take to change a light bulb?” Answer: “Two, one to change the light bulb and one to drive him up from Kent.” If I tell the joke in a self-deprecating way, I deflect the criticism of being yet another southerner who supports the Red Devils and I can then get on with supporting the best football team in the world.
In the mid-1990s Alex Ferguson, the team’s no-nonsense Glaswegian manager, signed the Frenchman Eric Cantona. He was the player whose artistry enabled United to win the Premier League in 1993, for the first time since 1967. Cantona was as famous for the controversy he caused as he was for the goals he scored.
On 25 January 1995 I went to see United play away at Crystal Palace. Living in Brighton, it was easy to get to South London and we used to see the Reds play there often. That night our caretaker Mick drove. We were sat in the far end of the Arthur Wait stand; I had forgotten my glasses and couldn’t see very well. Mid-way through the second-half Cantona was involved in some shenanigans when suddenly the referee waved his red card in his direction.
There was consternation amongst the United fans. It was hard to know what Eric had done. As chants rang out questioning the referee’s parentage, I kept watching Cantona as he left the pitch. Suddenly he launched himself into the crowd feet-first and started brawling with a Palace fan. It was over in a few seconds. Mick and the others hadn’t seen it. “Eric’s just drop-kicked a bloke in the crowd!” I shouted.
“Don’t be stupid Tommo – you can’t even see”, Mick laughed.
“He has! I tell you he has!” I said, laughing back. Just at that moment, the Palace fans start chanting, “Eric’s going home in a Black Maria” – the old term for a Police van. A dark, testy atmosphere pervaded the ground.
At the final whistle we raced to the car. On the radio, Paddy Crerand, one of the commentators and an ex-United player, sounded so stricken you’d have thought he’d lost members of his close family. We got back to our house in Brighton as Sportsnight began. Gary Lineker was almost unable to contain himself as he introduced the game’s highlights. He grinned like he was the man with the juiciest secret in the world.
Cantona was banned for eight months. On his return against Liverpool he provided the assist for Nicky Butt’s goal after just two minutes and went on to score a goal himself. His successful return to the game and the fidelity he showed to the club during his ban cemented his status as a United legend.
That season ended with the FA Cup final against Liverpool at Wembley. I watched the match at my mate Dickie’s house. It was a dull game. With a few minutes until full time, United won a corner. When the ball broke to the edge of the box, Cantona arched his body and volleyed it through a crowd of players to score the winner. It was a sublime goal. We went crazy.

The next morning The Observer sports front page was dominated by Tom Jenkins’ photograph of the moment Cantona’s volley rippled the back of the net. 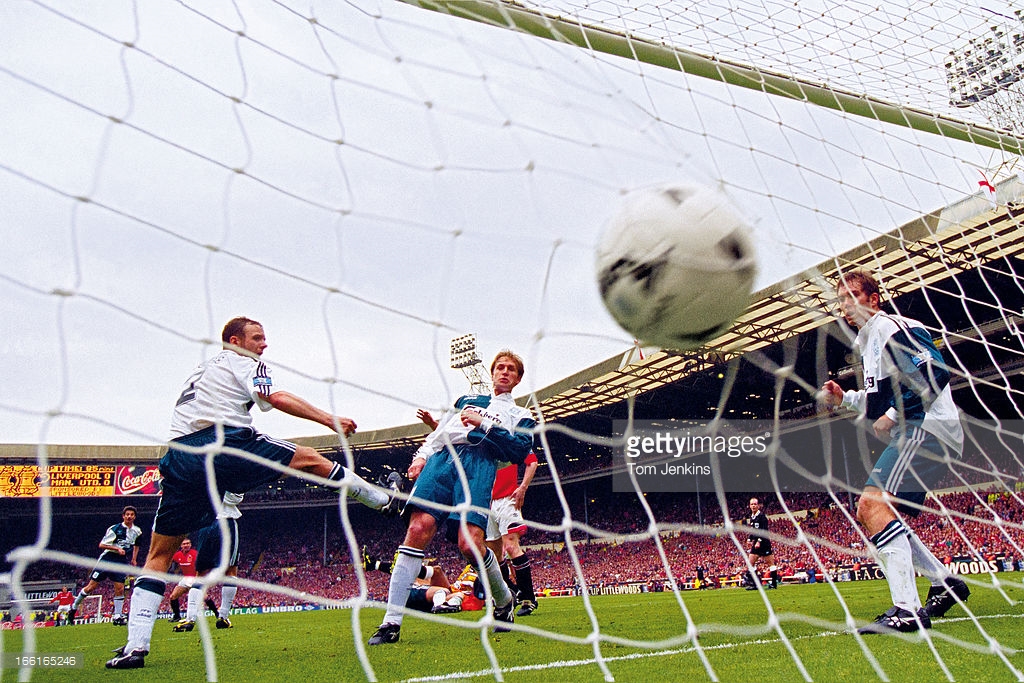 As is my wont, I wrote to Tom Jenkins and asked him if I he could send me a print. A week later my copy of his photograph arrived in, crucially, an envelope with a Guardian newspaper franking logo.
I have a lot of mates who support United who loved the photograph. In late July, armed with a dozen or more copies I’d had made of the original print, I set off for The Cliff, United’s training ground. I wanted all the prints signed by Cantona himself.
When I arrived at The Cliff there were quite a few people milling around. The players had just finished training. I approached the steward who was guarding the gap in the metal barriers. “Hello, I don’t know if you can help, but I’ve just come down from the Guardian. These are for Mr Cantona to sign,” I said, brandishing The Guardian-franked envelope.
After the merest deliberation, he gave the wholly unexpected reply, “OK. You know where to go.”
Without hesitation, I found myself walking through the barriers and across the car park towards The Cliff clubhouse. Gary Neville and I exchanged greetings. Once inside, I didn’t want to push my luck. I made straight for Eric. A man of few words, he took my black marker pen and dutifully signed every single copy of the photograph. I was back outside the barriers, with an envelope full of autographed prints, before I quite realised what had happened.
There is something undignified about a grown man queueing for autographs with a bunch of teenagers. As I stood there awkwardly, I struck up a conversation with a woman from London. She had three daughters. She told me how, only having had girls, she’d felt blessed that she would never have to wait outside football training grounds autograph hunting. How wrong she had been. She had come up just for the day with the three of them. The famous Manchester United Class of ’92, including a certain David Beckham, had attracted a significant female following.
With training over the players began drifting out to their cars. I was still chatting to the woman from London when a youth with a black baseball cap stood in front of me. He went to take my pen and envelope. “No, it’s OK. I don’t want yours. I just came for Eric’s,” I said. He looked up quizzically from under his cap, we exchanged glances for a nano-second and then he moved on.
A few weeks later I was back in the Arthur Wait stand for United’s opening game of the season when Beckham scored his now iconic goal from the half-way line. He stood a few yards in front of me, arms aloft, with a smile which suggested he knew he was destined, from that moment on, for superstardom. He became one of the most famous people on the planet.
And I am probably the only person on the planet who has rejected David Beckham’s offer of an autograph.