This much I know about…writing, the limits of language and catching a sea trout

I have been a teacher for 29 years, a Headteacher for 14 years and, at the age of 53, this much I know about writing, the limits of language and catching a sea trout.

Any representation of an experience is never going to rival the immediacy and the sensations of the real-life event itself. Faithfully recreating the intensity of an experience in words is, arguably, an impossible challenge. So many times words fail us. How often do you hear people say, There are no words to describe what happened?

Despite the impossibility of the challenge, this summer I set myself the task of writing a description of catching my first ever sea trout. Now, on reading this, the majority of readers will be reaching for the mouse to close this tab. But, essentially, this post is about the process of writing and the limits of language, not fishing.

To help me write about catching my sea trout I read for the umpteenth time George Orwell’s Shooting an Elephant, in particular for the detailed description of the elephant as it is dying. Even when I had done that and set out to write the piece, I could not find the form I needed. And then I began reading Mike McCormack’s Solar Bones, a novel written in a single sentence and surely a favourite for making the Mann-Booker Prize shortlist. Both texts were key in shaping what I have written…all art is theft.

So, here is my description of catching my first ever sea trout. I have held every single word and every piece of punctuation up to the light for scrutiny before confirming its inclusion. And when it comes to representing the thrill of catching a sea trout, these 450 words fall short, as they were always destined to do…

One fruitless cast, slightly short of perfect, is followed by another where the lure flirts with the overhanging branches at the pool end and then sinks out of sight before the slow, deliberate retrieve begins, and then a knock and then, a nanosecond later, a whacking thump and the spectacle begins as my brain computes what is happening, as the moment I have anticipated since dawn, a dozen hours earlier, arrives, but still, when it happens, my senses are scrambled by the shock of it and my arms and hands fumble to establish control of the rod and reel which are near ripped from my grasp as the fish understands, more acutely than me, that the fight is on and summons all the energy it possesses as it makes for the depths, lunging downwards to the river bed as I resist its frantic dash, striking hard, setting the treble hooks, rod arcing towards the river, the reel’s drag screeching, but no sooner I think I know where it’s gone than it changes tack and surfaces, skittering across the pool and I marvel for an instant at its wild, thrashing, tail-walking, gymnastic frenzy, then, before I realise it, the fish plummets down and down only to turn tail and hurtle skywards at a rattling rate, emerging from the water in a fleeting leap for freedom, an awesome, ephemeral display of powerful, piscine aerobatics which ends abruptly when it dives again, lurching one way then the other and I’m scanning this way and that for where it will appear next and suddenly it’s just a few yards away, surging into the river’s edge, seeking sanctuary amongst the tree roots, and my pumping heart tells me this is the decisive moment, this is when I can lose it all, where the fish swaps itself for something gnarled and immovable, and the gamble begins because not enough force and it’s lost in the roots, too much and the hooks rip from its jaw, so I hold my nerve, pressing my elbow that little bit harder on the rod butt, tightening the line, increasing the strain, ramping up the pressure and for those crucial seconds the dipping, plunging rod tip telegraphs down the line the news that we’re still connected, the hooks are secure and now the balance of power shifts as I ease the fish, slowly, back into the current and the struggle resumes but this time I’m in control when, without warning, the rod bend eases, it surrenders and suddenly I see the silver broadside ripple across the water, it’s under my boots and in the net, hoisted high above the river’s flow, trophy-like, a three pound sea trout – 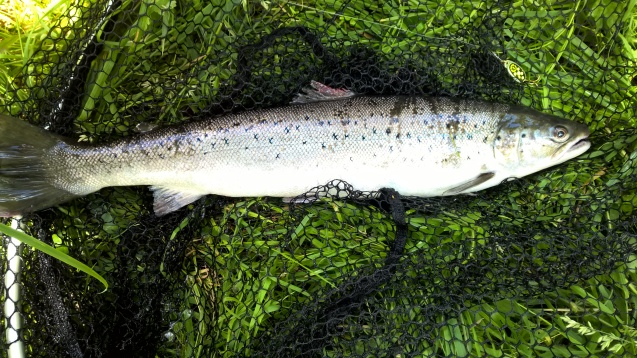 Headteacher in York. All views are my own.
View all posts by johntomsett →
This entry was posted in Other stuff. Bookmark the permalink.

2 Responses to This much I know about…writing, the limits of language and catching a sea trout