I have been a teacher for 30 years, a Headteacher for 15 years and, at the age of 54, this much I know about behaviour management, “flattening the grass” and Mary Myatt.
A simple truth: you cannot teach as well as you possibly can and students cannot maximise their learning if students are not behaving in the classroom. 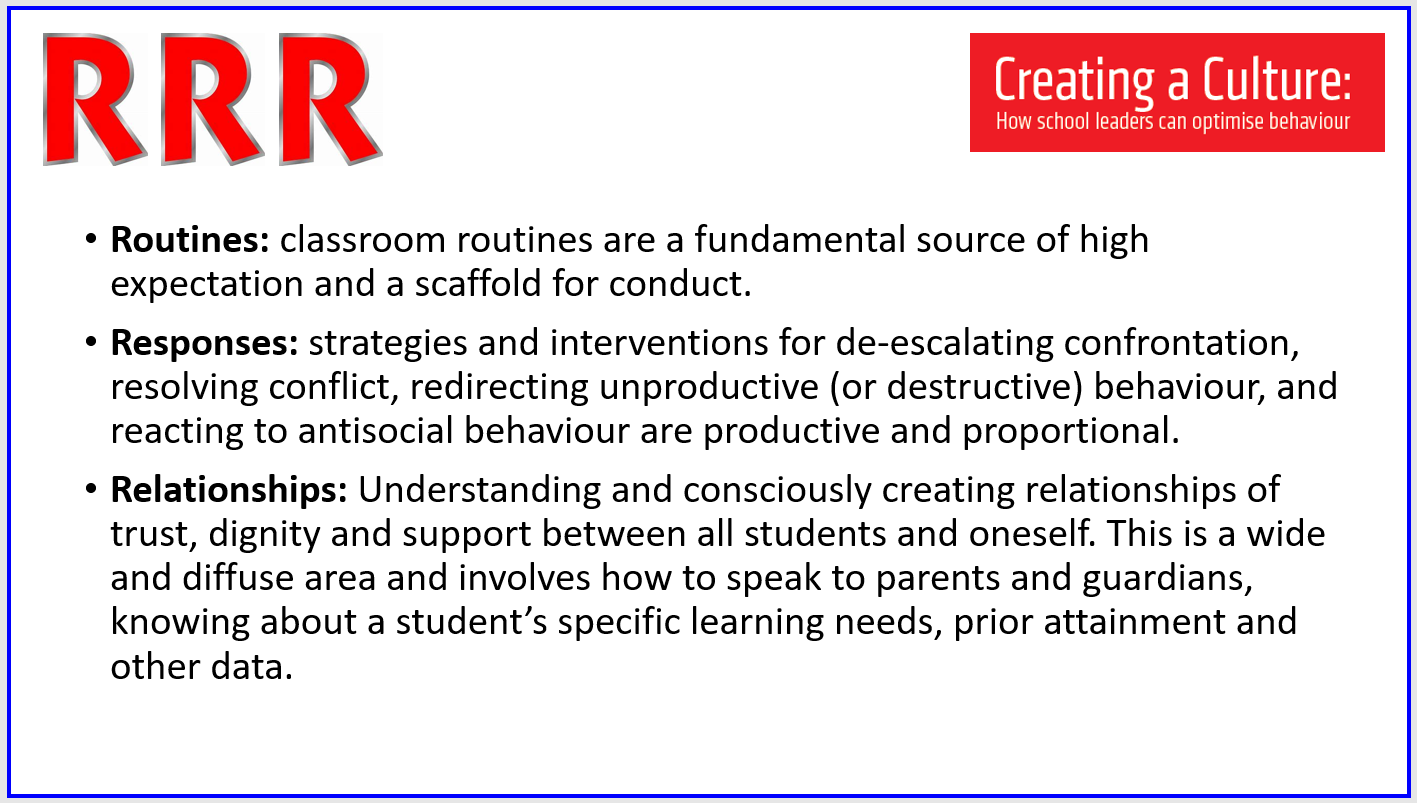 For the first time in my 11 or so years as head teacher at Huntington, we had a training day which focused on behaviour management. The day was led by Matt Smith and Gail Naish, two of our deputy head teachers. The training was largely based upon Tom Bennett’s 3Rs of Behaviour Management: Routines, Responses and Relationships. Matt and Gail put together materials which had an immediate impact upon behaviour in school. It was an overwhelming success; on Friday, two days after the training, in a school of 1,526 students we had only three behaviour comments on SIMS, our lowest for a decade. True. Matt outlined seven de-escalation strategies; the slide explaining one of them is below: 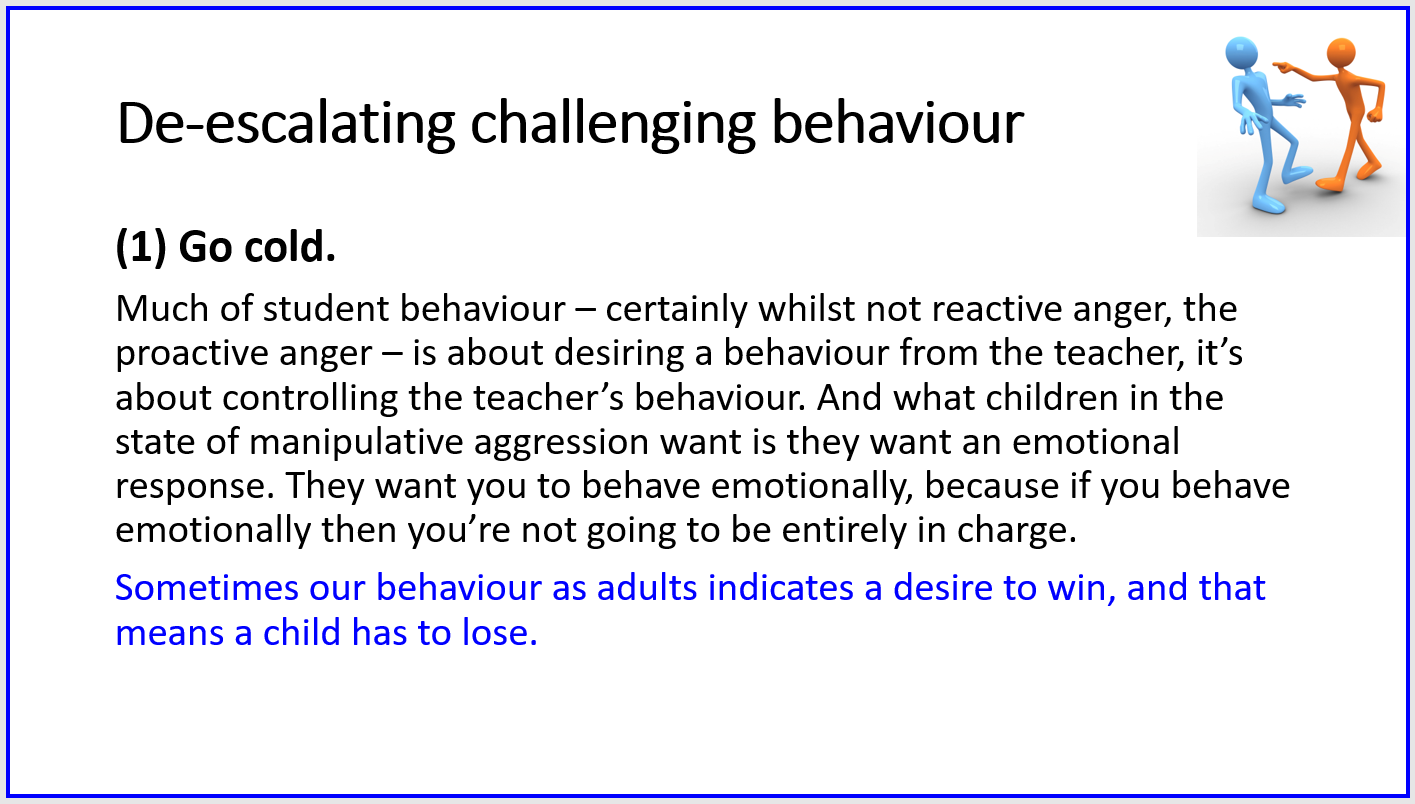 The impact of the training was not restricted to the classroom; a couple of colleagues reported to Matt and Gail that they had tried the techniques at home with their own recalcitrant teenagers and they had worked a treat! I think I have persuaded Matt to write a blog about the training. Its impact is testimony to how important it is to tailor training to the school’s context. We are working on reducing low level disruptive behaviour at the margins, rather than confronting school-wide challenging behaviour which borders on the chaotic.
Context matters. Later in the week I heard of a MAT-endorsed behaviour ethos-setting exercise called “flattening the grass” rolling assemblies. Allegedly, this involves the MAT executives visiting the school, en masse, to stand around the edge of the assembly hall whilst the head of school outlines, in emphatic terms to year group after year group, the MAT’s expectations of students’ behaviour. Before the assemblies begin, individual students are identified for the head of school to single out in front of their peers until they cry. If the head of school is not emphatic enough, the MAT CEO walks forward, replaces the head of school and concludes the assembly in a more suitably emphatic manner. The students are the “grass” which is “flattened” by the experience.
I finished the week inspired by the wonderful Mary Myatt. She reminded her audience at the Canons Park TSA conference that we are all people first and learners second, something I can subscribe to, even if, as Tom Bennett pointed out years ago, I haven’t got the evidence… 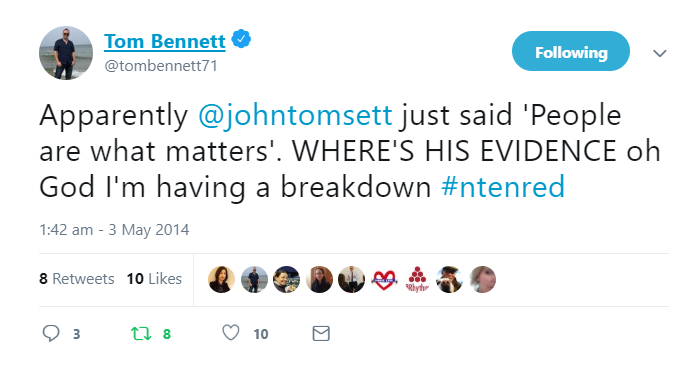