I have been a teacher for 30 years, a Headteacher for 15 years and, at the age of 54, this much I know about the creative writing process, Don McCullin’s photography and Vic Goddard’s Auntie Vera and Uncle Clay!
What inspires art? I have written a couple of sonnets recently; the first was motivated by a tale Vic Goddard told on Twitter about his  Auntie Vera and Uncle Clay, whilst the second derived from a visit to Tate Britain to see Sir Don McCullin’s retrospective exhibition.

The process between the stimulus for the poem and the finished artefact is complex and fascinating. The first sonnet, Park Love, began with this sequence of Tweets by my dear friend Vic:

I had thought about this tale for a couple of weeks and finally sat down to write after I had clarified a few things with Vic: 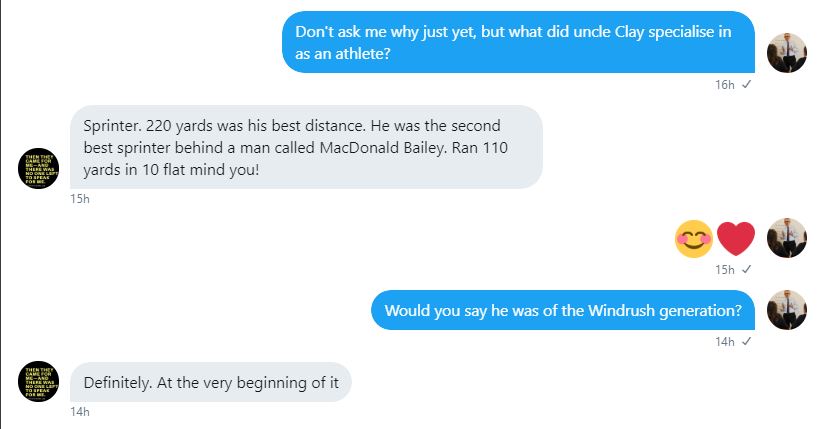 I also researched that period of history and discovered the St. John’s Inter Racial Club in south London.
When Marie Heaney reflected upon living with her poet husband Seamus, she knew when he had a poem percolating: they would be sitting watching television together in the front room when Seamus would begin tapping out the rhythm of the words in his head on the arm of the sofa with his fingers. It is that essential iambic beat of poetry that begins working in my consciousness when a poem comes on. From that point, when a phrase or two develop in my mind rhythmically, I commit the words to paper. I began Park Love by merely writing out what Vic had disclosed in his Tweets, phrasing things iambically where I could: 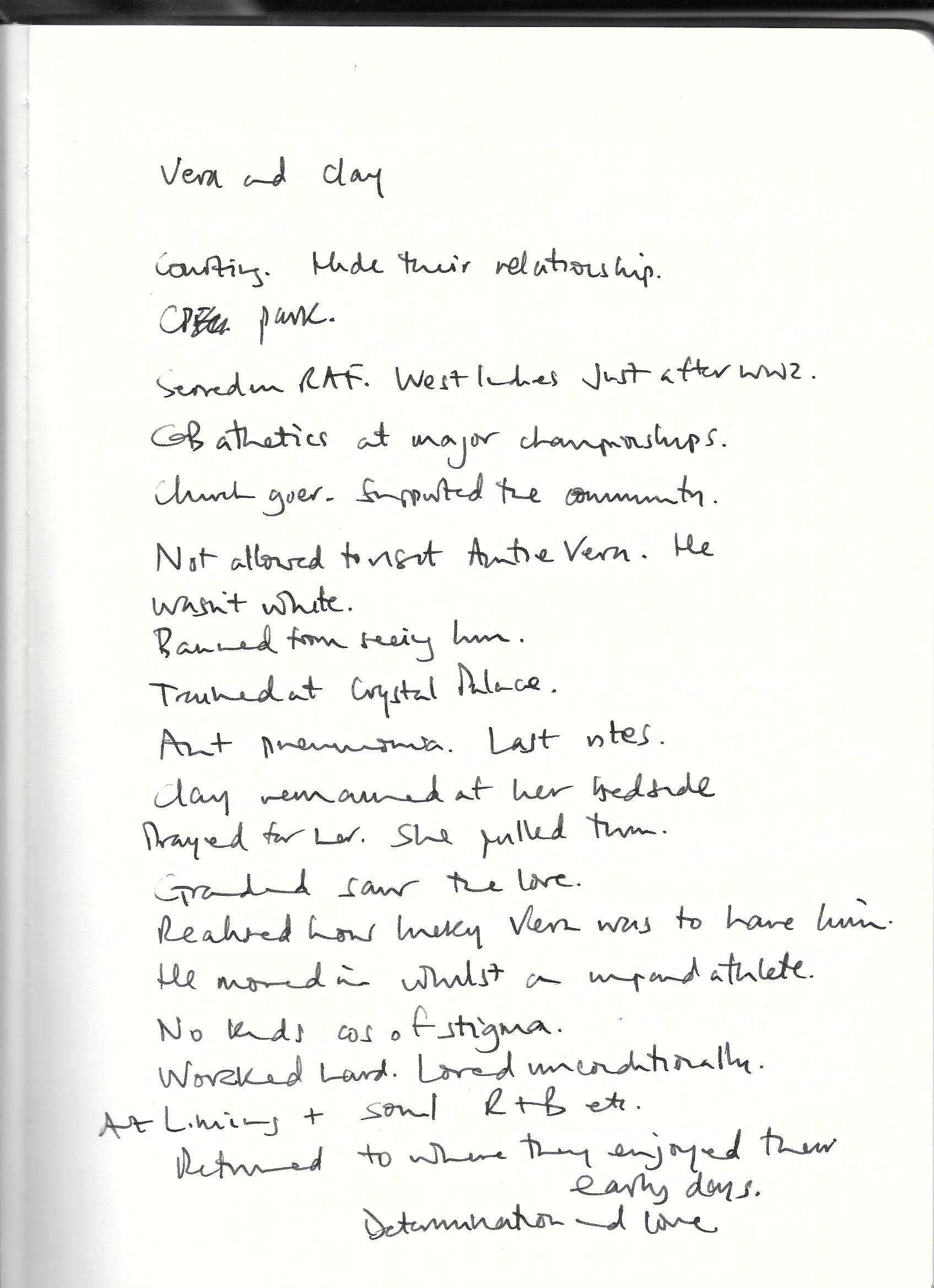 The sonnet then developed in five further drafts: 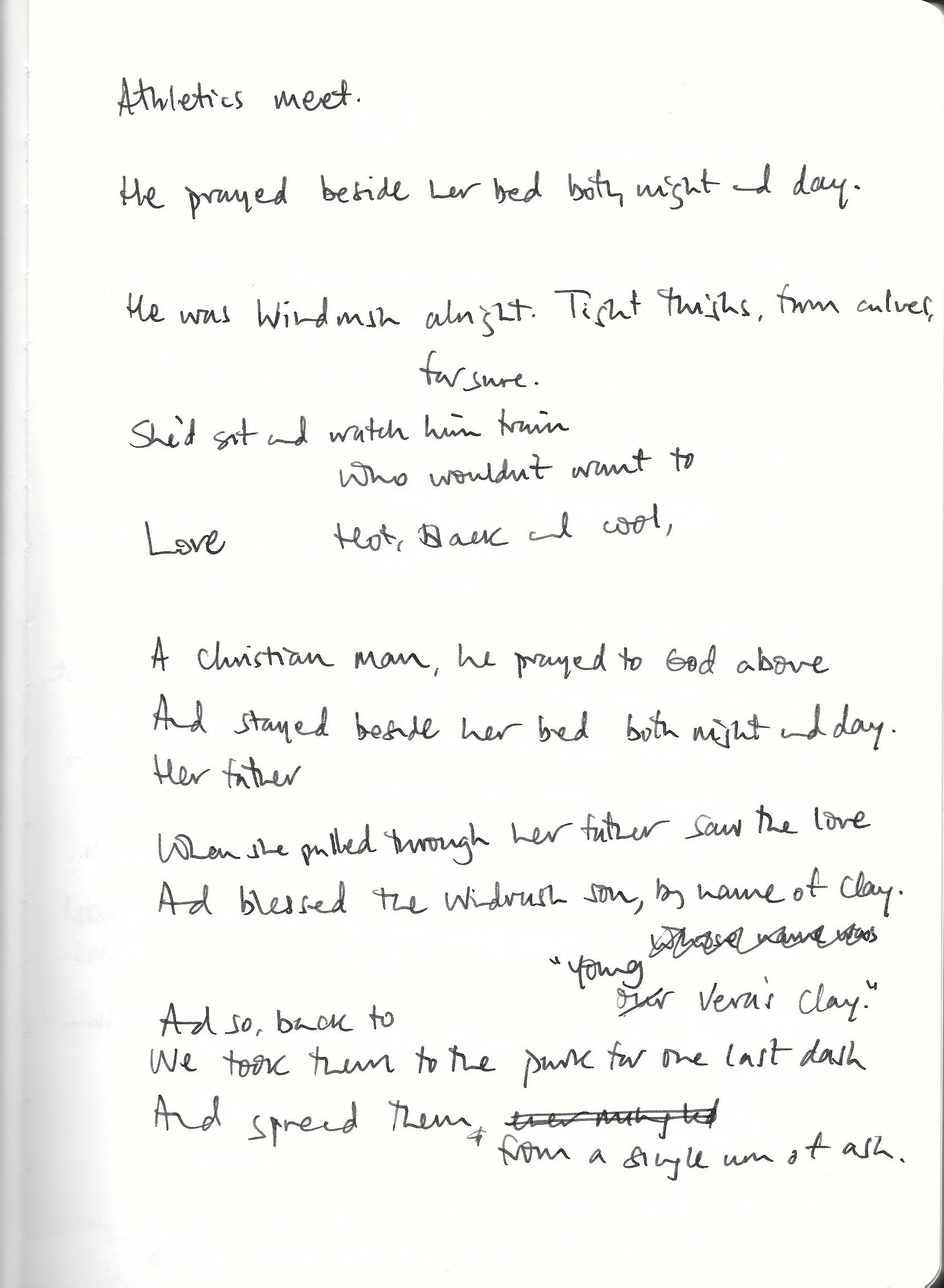 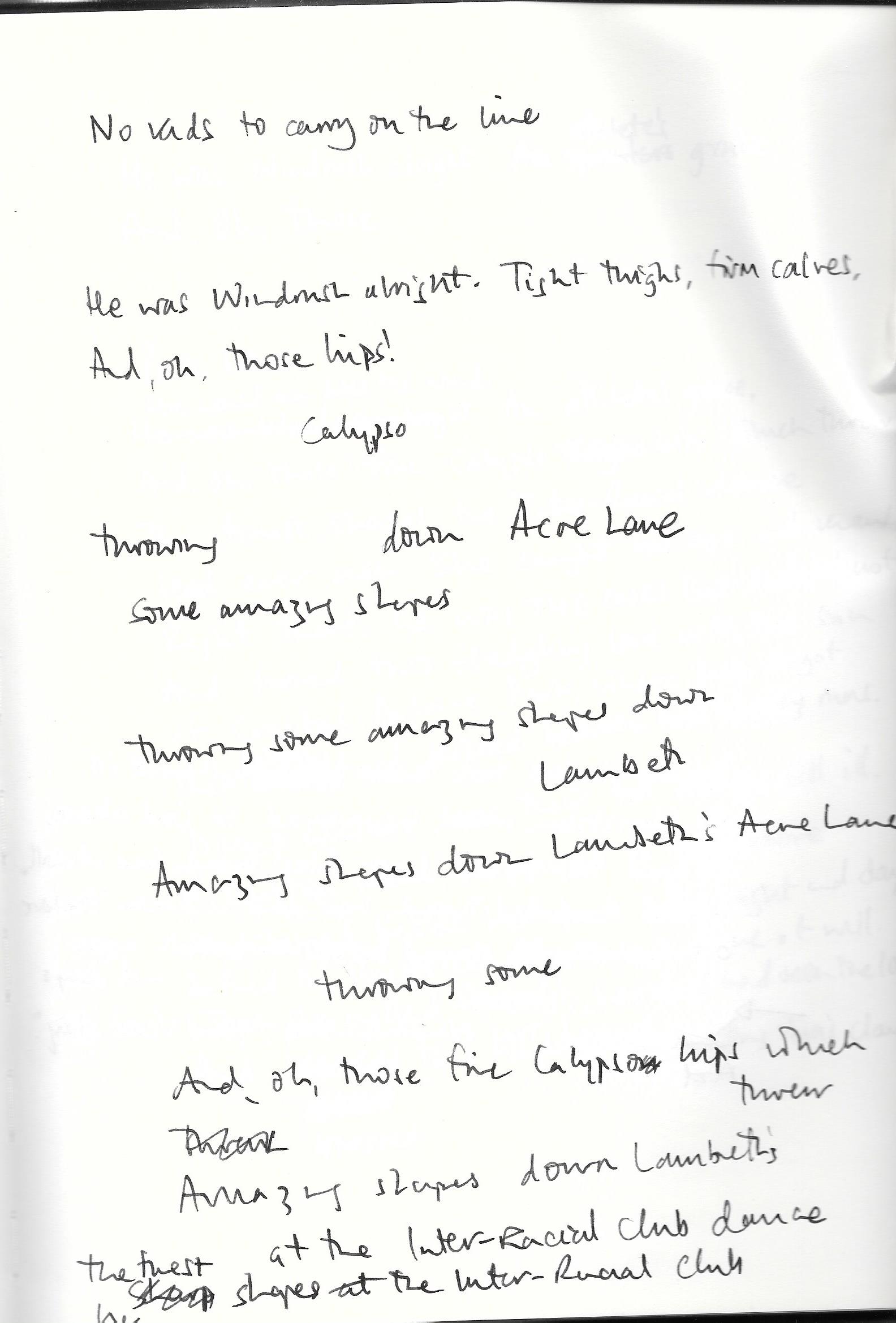 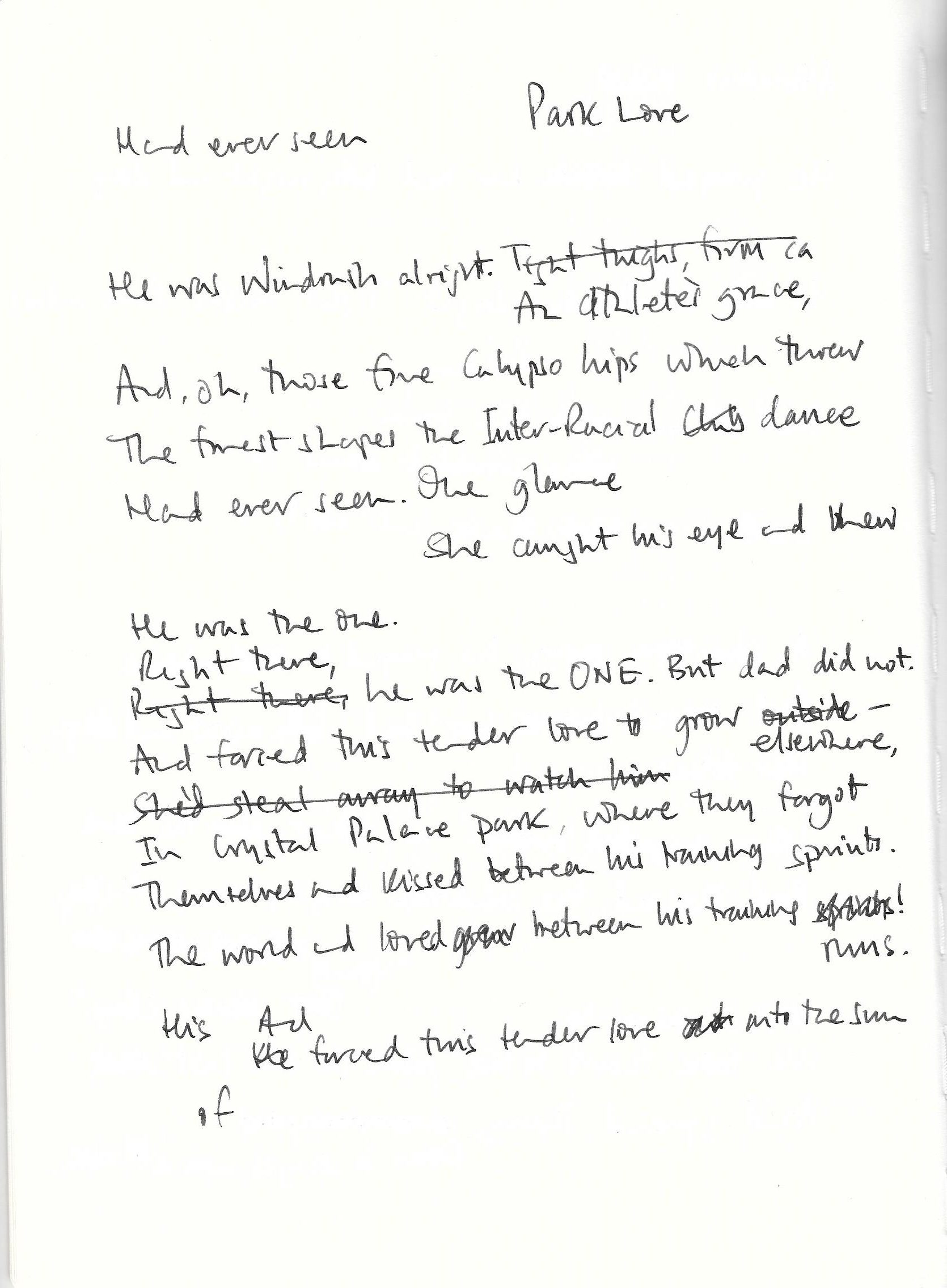 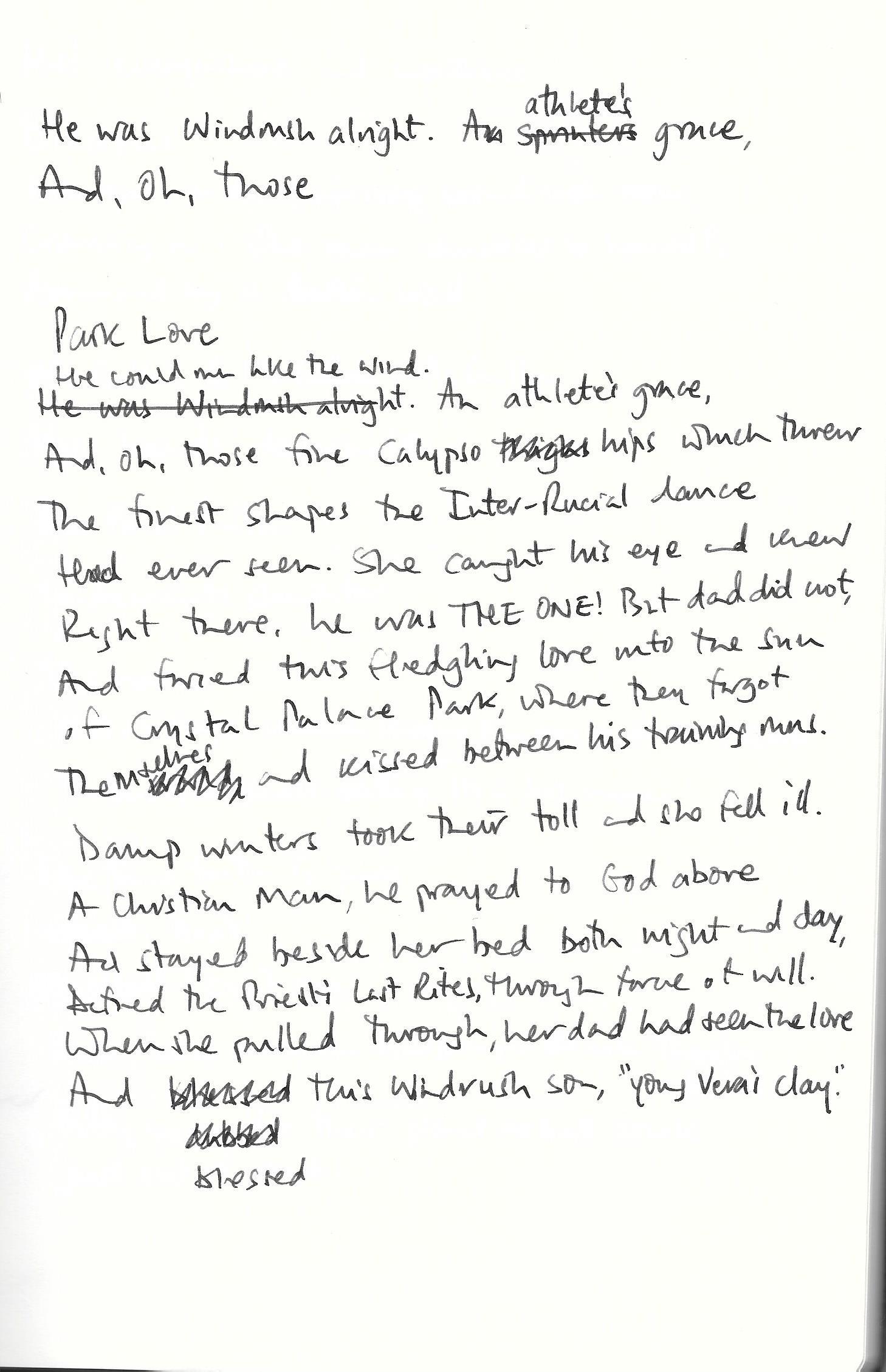 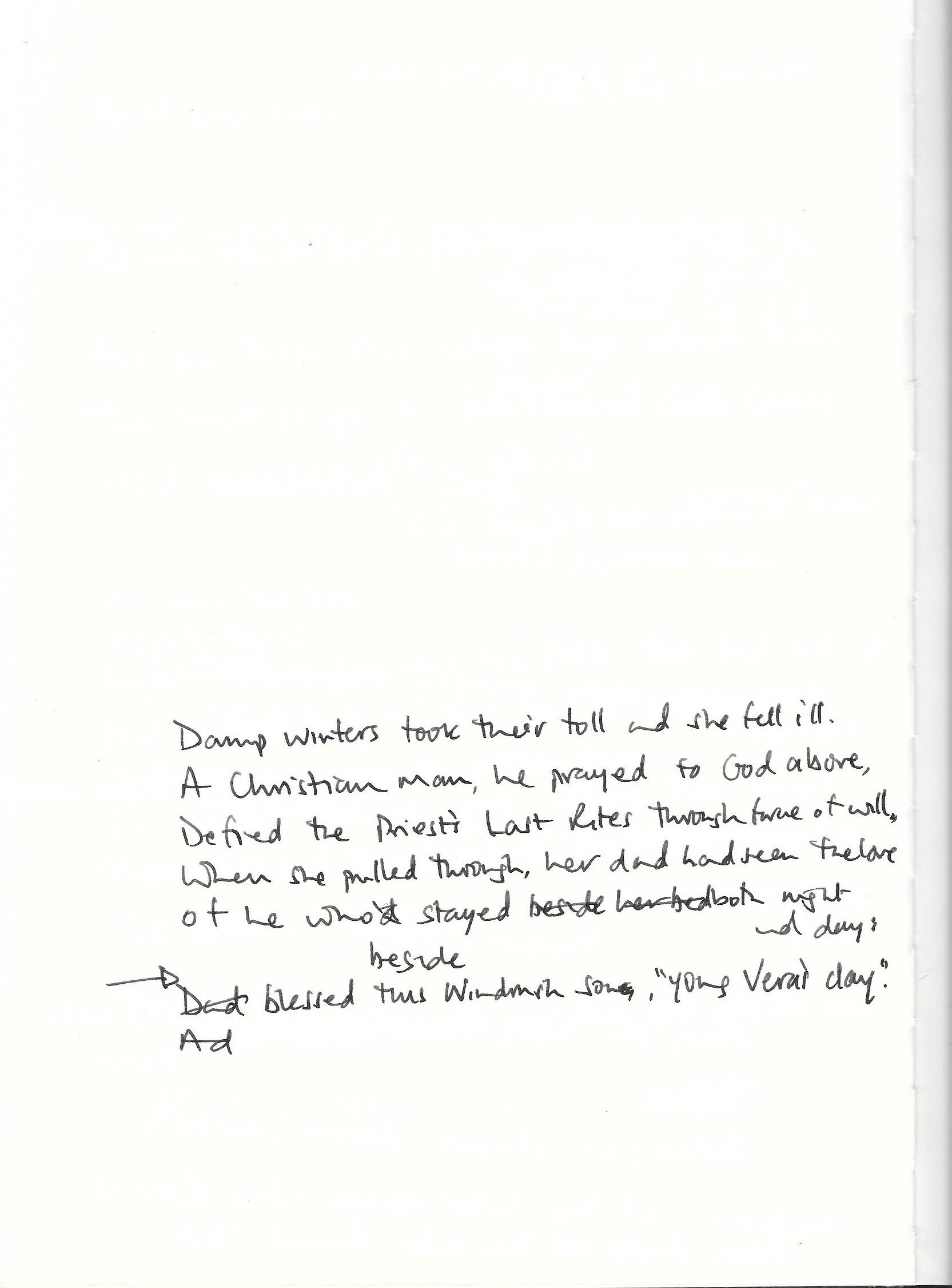 At this point I word process what I have and some word choice decisions are inevitably lost, such as the change to the opening line. 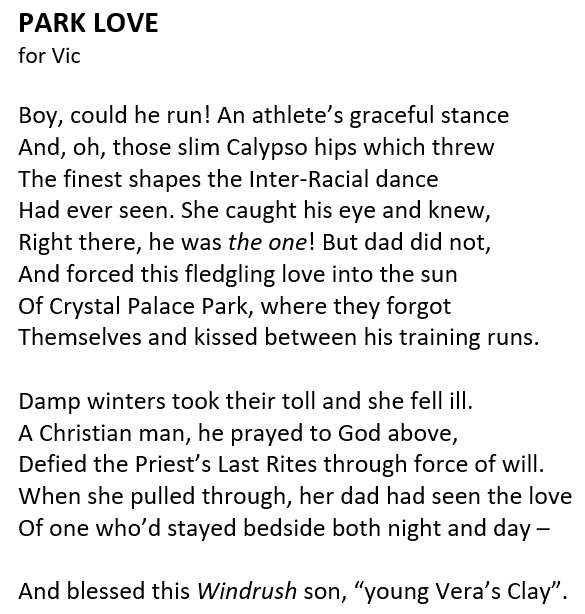 I am a terrible tweaker; a poem is never quite finished. Even preparing this blog saw me change a word or two. This is the current version of Park Love:

Boy, could he run! An athlete’s graceful stance
And, oh, those slim Calypso hips which threw
The finest shapes the Inter-Racial dance
Had ever seen. She caught his eye and knew,
Right there, he was the one! But dad did not,
And forced their fledgling love into the sun
Of Crystal Palace Park, where they forgot
Themselves and kissed between his training runs.

Damp winters took their toll and she fell ill.
A Christian man, he prayed to God above;
Defied the Priest’s Last Rites through force of will.
When she pulled through, her dad had seen the love
Of one who’d stayed bedside both night and day –
And blessed this Windrush son, young Vera’s Clay.

The story behind Clay Gibbs is remarkable. Here he is training with Olympic medallist McDonald Bailey, looking the epitome of cool! 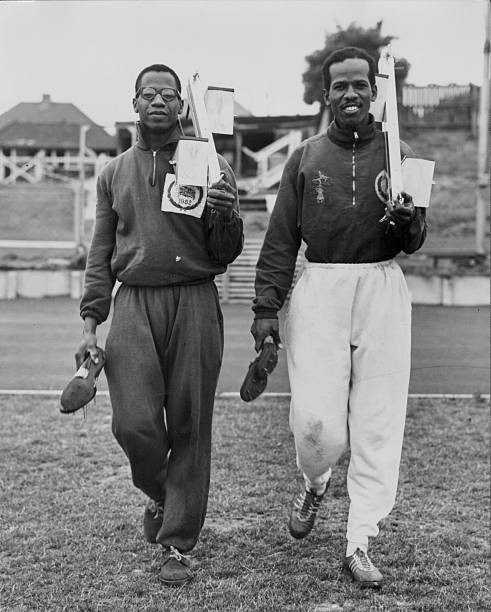 Whilst I had thought for a fortnight about Clay and Vera’s story, this second poem came very soon after visiting Tate Britain to see Sir Don McCullin’s retrospective.

I published a version of the poem on this blog a couple of weeks ago and since then, it has evolved. The current version below has been honed in response to comments by fellow poet and head teacher, Jonathan Taylor. When I get close to finishing a poem, metaphorically I hold up every word to the light so that I can inspect it closely to decide whether it is precisely the word required. If I am honest, I am still unsure about the second, third and fourth words of the first line…

He haunts each room. His liver-spotted hands
Birthed every print. In reverential awe
I stand, transfixed. This gentle artisan,
For one last time, displaying what he saw.
Here is my work, he seems to say. Enough!
And injured, there, beneath the gore, breathes love.

I have not included the drafts here; instead I made a video of the poem.