I have been a teacher for 32 years, a head teacher for 17 years and, at the age of 56, this much I know about Heaney, Hughes, Cooke, fishing and me!
By 9 am this morning six friends had sent me links to the emerging news that a previously undiscovered archive of writing and art by Seamus Heaney, Ted Hughes and Barrie Cooke has been made public. What made the link that much more apposite for me, is that the triumvirate’s friendship was founded upon fishing. If we were playing Tomsett-Bingo, that is pretty much a Full House!

As regular readers of this blog will know, I have just published a book about fishing. As the University of Lancaster’s Professor Simon Bainbridge remarks in his testimonial, An Angler’s Journal ‘isn’t just about fishing…it’s a book about friendship, family and finding meaning through a lifetime’s obsession with “the fish landed and the fish lost”‘.  Even if I say so myself, at a tenner a throw it will make a perfect stocking filler for the angler in your life!
In this tale of friendship, family and fishing, the piscine spirit of Ted Hughes makes an appearance…

One of my clear memories of growing up was living with the fact that my dad had chronic angina. As a postman, dad’s heart condition meant he was given his own post van and a single round through the country lanes of Palehouse Common, near Uckfield, the Sussex town where we lived. It took the pressure off him walking and having to carry a heavy bag of post. What it afforded him was the chance to forge strong, life-enriching relationships with the men and women to whom he delivered letters.

One of dad’s friendships from which I benefitted directly was with Norman and Guy, the two housekeepers at Arches Manor, a gorgeous eight bedroom, 16th century mansion. Hugh Vaughan-Thomas, Glamorgan cricketer and brother of the BBC radio presenter Wynford, owned Arches but was rarely there. It was typical of such residences, in that it had a decent pond which, back in the day, would have provided the manor house’s inhabitants with many a decent meal.

Norman and Guy loved my dad and allowed me to fish the carp pool whilst the three of them drank wine and danced to Dolly Parton singing “Stand By Your Man”. When I first started, I was a bit rubbish at the fishing, thinking that the bigger the fish – and there were some monster carp in that pond – the bigger the bait required. The tennis balls of bread I used as bait were completely inconsumable.

One evening, Jim and his dad came along. Jim brought his specialist carp rod with him. Jim knew a thing or two about how to fish. Unable to tempt a carp, I had lost interest and been reduced to catching tiny roach and rudd on maggots. Jim had set up a leger rig just to my right. He had a sophisticated bite detection system – a red washing up bottle top between the first and second guide, which he kept tight to the ground with a twig lodged in the lawn. It was a thing of beauty, especially when it rattled hard against his rod. I turned round to see him strike and the carp rod bend more than I thought possible.

What happened next amazed us all. Instead of Jim engaging in a protracted battle with a double figure carp, this huge eel came tail-walking across the surface of the pond, straight at us, like an Arabian Knight’s whirling scimitar. Jim reeled in frenziedly. The eel thumped into the bank below, span round, snapped the line and, before we knew it, vanished back into the mud of Arches Manor pond.

I spent the rest of the session, as darkness fell, sitting stock still, Ted Hughes-like, with the “hair frozen on my head” for what I might catch, for what might be staring up at me from the ancient depths. 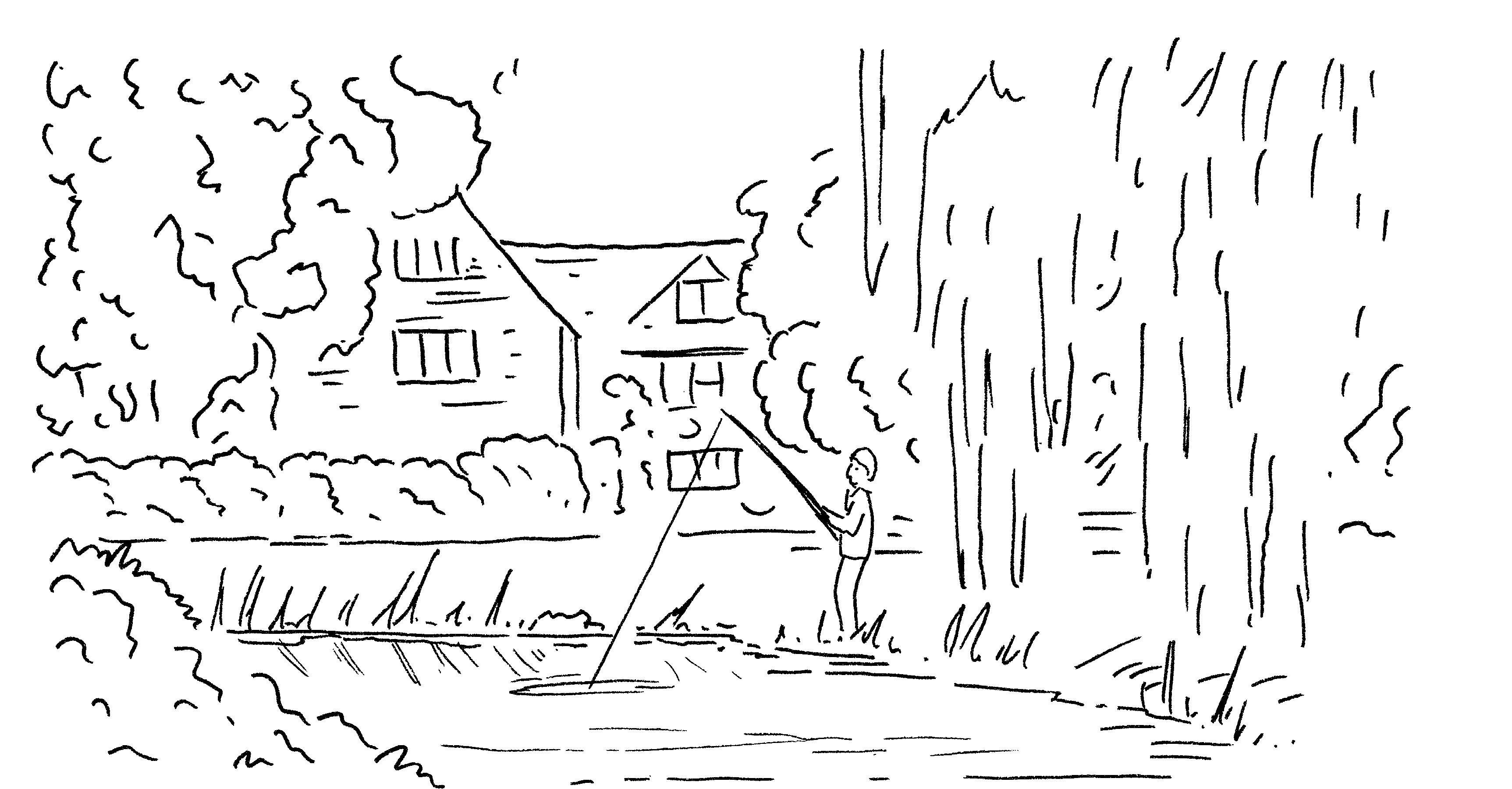