I have been a teacher for 32 years, a head teacher for 17 years and, at the age of 56, this much I know about why the Rt. Hon. Kate Green MP is wrong about the curriculum.
An edited version of this blog was published online by the TES last in November 2020.
The Rt. Hon. Kate Green MP is the Shadow Secretary of State for Education. Last Thursday, she announced that she was unhappy with the current school curriculum which “has become a bit joyless” as a result of a “narrow” national curriculum, which is “information-heavy and traditionalist”.
I want to explain in clear terms why she is wrong.
I am teaching a module on rhetoric to a Year 9 mixed prior attainment English Language class of 30 students from the full-range of socio-economic backgrounds. We have spent three lessons looking at Winston Churchill’s “We shall fight on the beaches” speech. 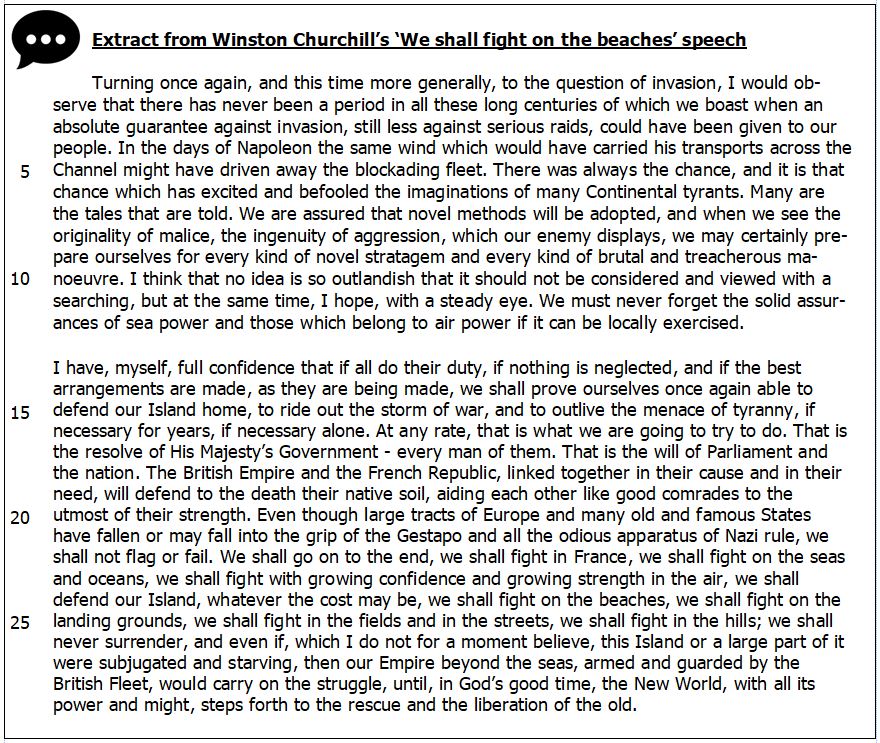 Now, we could just watch the film extract of Gary Oldman as Churchill from The Darkest Day, then ask every student to write a speech aimed at persuading the head teacher to get rid of school uniform. We could then spend four lessons listening to students deliver their very average speeches. In the past, that is what I might have done. It would have been an instantly forgettable learning experience, and a waste of their time and mine.
But I am now three lessons into the scheme and I have not even finished what was planned in the scheme for lesson one. That is because the students do not know enough to understand what Churchill was talking about. In a previous lesson, Bella had commented that she did not know what Mark Antony was saying in his “Friends, Romans, Countrymen” speech because she did not understand some of the words. I stopped and we went through the speech again, line-by-line.
In this week’s lesson on Churchill, I decided to stop what we were doing and I gave the students five minutes to identify all the words they did not understand. We then went through the speech annotating it with Eva, our Teaching Assistant, helping me by writing on the whiteboard the definitions of words so I could face the class of 30 and orchestrate things.
When I began defining/exploring the words they did not know, I chose Barry, the recalcitrant boy who thought he was out of reach on the back row, to offer up the first six words and I also tested him at the end of the session with any words I thought he still might not know. “Let’s go to Barry to start…Why not do the next one too Barry…How about a hat-trick Barry!?…and the next word from…Barry! And the next from…I know, Barry! And you’ll never guess, but the next word comes from…Barry!”
Six in a row is a great tactic – who said Barry had to answer just one before I moved on? I make the rules in the class, not custom and practice!
So, here are 22 words the students needed explaining/defining:

Allegedly, according to Alex Quigley, students need to understand 95% of the vocabulary to comprehend a text.[i] Well, 22 words comprise 4.3% of this 508 word text. I think if I had another ten minutes, I would find that the students did not understand “assurances” (11) “searching” (11) and “exercised” (12) along with a host of other words as used contextually by Churchill. And we did not even have time to explore exactly what comprised the British Empire and the French Republic.
My point is simply this: even if they did know 95% of the words they would not have understood the text at a level which was remotely insightful.
If they did not understand the text in an insightful way, how could they discuss with me how Churchill appeals to British patriotism to gain support for the war effort? They could not have analysed the literary techniques he uses, if they did not know the meaning of what he is saying.
My other point, which is key to make, is that the students are really enjoying the lessons. Our lessons are joyful, because the students are learning. A highlight was when a student realised before I did that a tractor is called a tractor because it has the same etymological root as tract. Genius!
And even the trickiest characters cannot help themselves. During the previous lesson, when they had packed up and I was checking their learning as we waited for their staggered slot to end their day, when I asked where Churchill was born, David – a professional chair-sloucher if only I were to allow it – threw his hand-up and said, “Oxfordshire”.
And that was the same lesson where Emma – the same Emma I have had to chastise twice recently, once for spraying water around the top deck of the H1 bus and once for encouraging the non-wearing of masks, much to the distress of the bus driver – brought in her great uncle’s hand-written, yellowing, first-hand account of his escape at Dunkirk. Priceless.
When I read the account to the class, they were transfixed and I could feel a quiver spread from the small of my back to my shoulders and up my neck. Such learning moments live in the memory forever.
I teach largely working class, white students – arguably the most disenfranchised socio-economic group of students in our country. They want to learn, but you have to insist that they learn, until it becomes the norm in your classroom. I rant at them. I tell them what they are getting from me is a high quality education. That they are lucky to have me share what I know with them. I implore them not to revel in not knowing stuff, but to delight in being knowledgeable.
I teach from the front. The students are in rows, facing me. I insist upon eye-contact and 100% attention, 100% of the time. I am relentless in those lessons, because it matters in my soul that the masses are not short-changed with teaching and learning characterised by low expectations.
How can our students gain a “wider understanding of the world which [they] are growing up in” if they do not know and understand the words required to gain that understanding? And the most efficient way for those students to widen their vocabulary is for me to tell them what the words mean in a text. That means that they sit in rows and pay attention.
So, Kate Green, please listen to other voices. As I am no knee-jerk traditionalist (my first book is called Love over Fear, for goodness’ sake!), please don’t you be a knee-jerk progressive. Such binary nonsense is just that. Nonsense. As someone articulated so effectively not that long ago in British history, there is always a third way.
I have spent the last ten years working in classrooms which are more evidence-informed than ever before. As I near the end of my career, I finally understand what works. And what works for the students in our state schools, where we educate the masses at scale, is getting them to know and understand stuff. It is not joyless; rather, it is making sure that children from all socio-economic backgrounds encounter “the best that has been thought and said”.
I am all for “cramming [students’] heads full of facts” because only then can they “develop their own faculty for critical thinking, asking questions and interrogating data”.
We both want the same thing Kate, but only I know how to get it.