I have been a teacher for 25 years, a Headteacher for 10 years and, at the age of 49, this much I know about speaking at the Oxford Union. 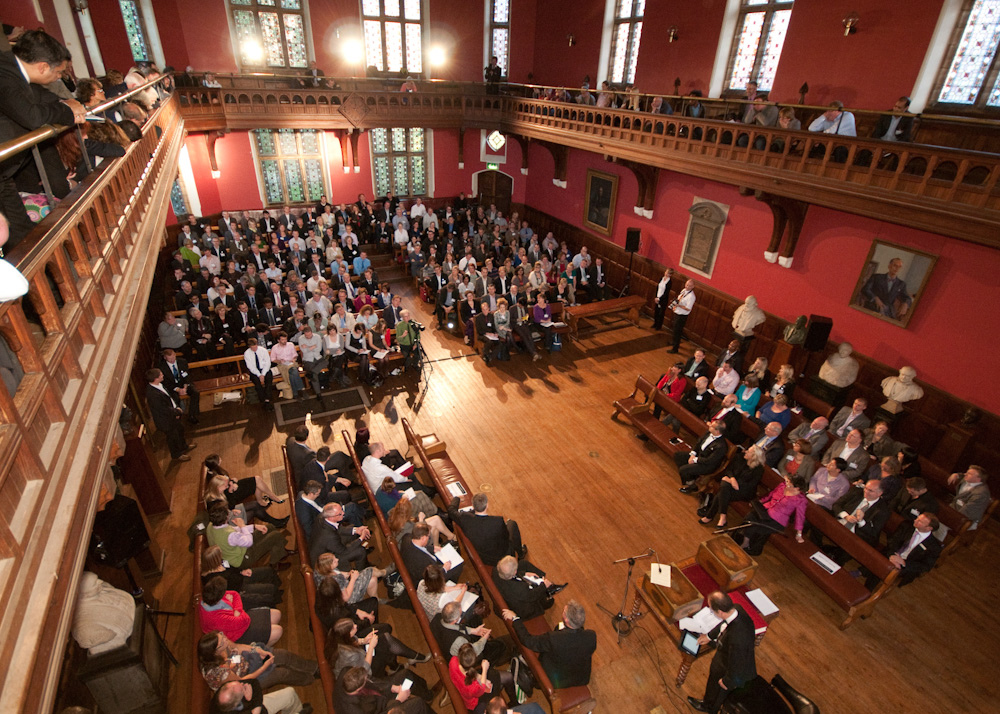 I have written about bridging the gap between independent and state schools before. Consequently, being asked to speak in support of the Oxford Union motion, “This House Believes That Private Schools Do More Harm Than Good” placed me in an awkward position. The trouble is, I am a member of the steering committee for York’s Independent State School Partnership and have worked hard for a number of years now to help the two sectors work together more closely in order to benefit all our students.
Debating is an art form. You debate in teams of three. After the first two speakers from each side have contributed to the debate it is opened up to speakers from the floor. The third debater opposing the motion sums up. 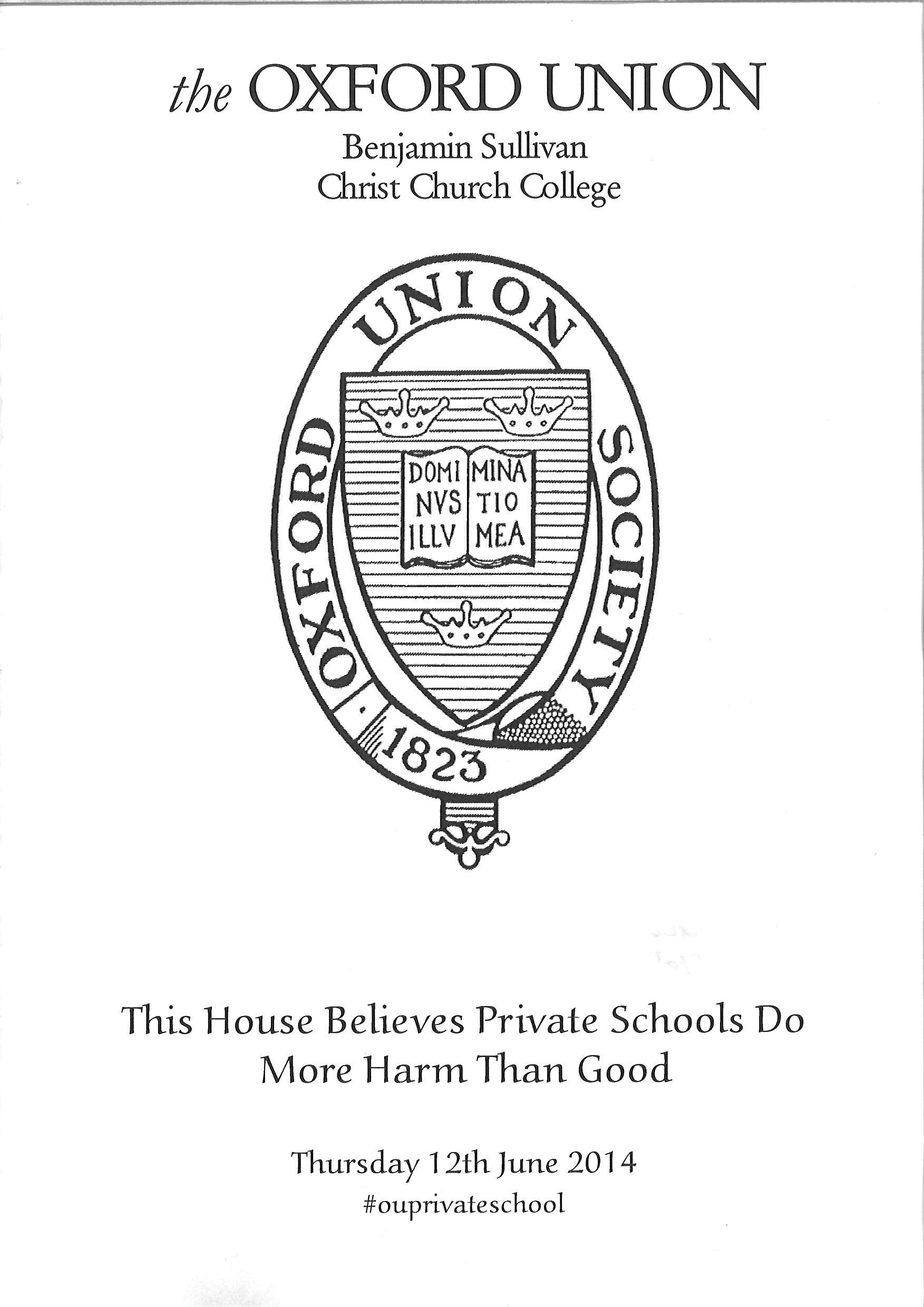 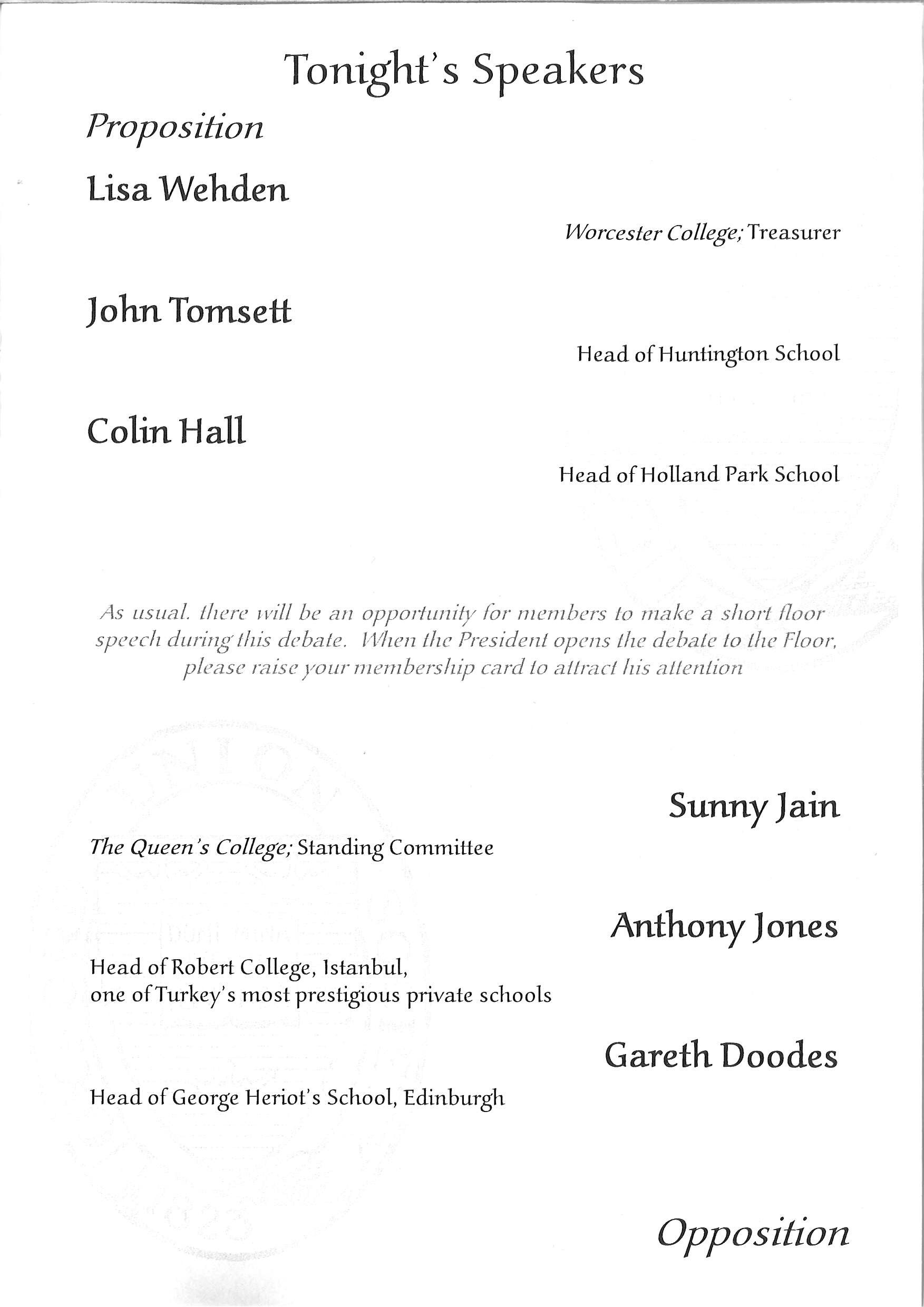 When I spoke, then, my argument was crafted to support the motion provocatively – what better place that the Oxford Union to challenge the nation’s ruling classes?

This House Believes That Private Schools Do More Harm Than Good

Thank you Mr President for inviting me to debate an issue that is very close to my heart.

Private schools produce some wonderful people and truly great leaders. That’s not for debate. And those great figures have contributed a huge amount of good to this country. Of course they have. It would be silly to say anything to the contrary. One of the greatest leaders the world has ever known, Winston Churchill, went to Harrow. Wellington and Gladstone – both Old Etonians.

Even if you just take York, my home city, the roll call is pretty impressive – Christopher Hill, Joseph Rowntree, Judy Dench and Margaret Drabble: all alumni of York’s private schools.

But, the debate tonight is not whether Private schools do good, it’s whether they do more harm than good.

And I would argue that private education has a profoundly harmful effect upon our country. The rich are getting richer and the poor are getting poorer and the private school system contributes significantly to our nation’s growing inequality.

At a basic level, parents believe they are buying an advantage for their children in sending them to a private school. They believe that smaller class sizes, more diverse subjects, wider learning experiences: all these factors will help their children get ahead.

And in terms of measures like educational attainment and Oxbridge entrance, the data suggests that they’re getting their money’s-worth.

So, given the critical importance of educational attainment to success in later life, we could have a straightforward debate about whether we want to live in a nation where a small percentage of the very rich can buy a fast track to success that the vast majority of families cannot possibly afford.

The thing is, I believe our system of private education does something more pernicious: it separates a privileged elite from the rest of us, with some devastating consequences.

Of course some state schools are more ‘comprehensive’ than others, but go to any state school and you will find students from a wide-range of socio-economic family backgrounds.

In state schools children grow up alongside fellow pupils who have different social roots. Just by rubbing shoulders with their peers in the lunch queue they learn that our lives vary.

And most importantly, children form friendships across the social divide.

They experience school, in other words, as they will experience life – where our social groups aren’t predetermined by parental income and where society is actively working against segregation rather than instilling it as acceptable.

This experience for children is absolutely critical to developing a society that has the potential to be inclusive, to empathise, to seek fairness.

And the crucial thing is, such a social mix is missing from the leadership elite in our professions. Certainly our judiciary, our legal profession, the media, medicine, the City’s financial institutions, all largely led by people who were privately educated.

Just visit the Justice.gov.uk diversity web site and the very first page reads: A common description of a judicial office-holder is “pale and male” – a white man, probably educated at public school and Oxbridge.

This stranglehold on positions of power has proven extraordinarily hard to break. There is a ‘club’ that exists at the top of many professions, which leads to the continual appointing of “people like us” to senior positions. If you are a state school child, you have to beat extraordinary odds to become, say, a judge.

Exceptional opportunities, unshakeable confidence and the ability to exploit a network, they combine to give the children of the privileged a powerful head start in life. And the children from less fortunate backgrounds are kept outside that ‘club’.

And some positions of leadership have particular influence: those of top politicians. The way a nation is steered is hugely influenced by the backgrounds of those sitting around the Cabinet table.

Go back to what I said about children in state schools forming friendships across social divides. If you went to prep school, and then Eton, and then Oxford, when do you connect with someone from the local council estate?

Here’s Michael Gove’s view of the huge number of Old Etonians in David Cameron’s inner circle, “It’s ridiculous. I don’t know where you can find a similar situation in a developed economy.”

People like George Osborne and David Cameron have missed the opportunity to move in a social circle that could include the son of the local postman, someone like me.

And I ask the question, how can the privately educated elite who run this country have any genuine sense of what it is like to survive on the average UK salary of £26,500 a year, when their annual school fees alone are over £30,000?

How are they able to empathise with the challenges of family life in current Austerity Britain? Can they hug a hoodie? Can they? Really?

No wonder the electorate are losing faith in the political classes.

And is it any wonder, then, that they have chosen to press hard on the poorest by cutting vital services – services they and their families have never needed – whilst offering tax cuts to the wealthiest?

Private schooling adds to the curse of inequality and inequality harms us all. In 2009, in his Hugo Young memorial lecture, even David Cameron admitted that, More unequal countries do worse according to every quality of life indicator.

The thing is, income inequality in this country is at Victorian levels. In the last 100 years, our country was at its most equal in 1975, the very year I began my secondary school education.

State school educated Harold Wilson presided over a Government which enforced an 83% income tax rate on the super-rich. 83%. Think of that. When I began university in 1984 I received a full grant and tuition fees were unimaginable.

And income inequality only grew under Tony Blair, who, according to Neil Kinnock, was always impressed by wealth, aided by Peter Mandelson, the man who famously said that he was intensely relaxed about people getting filthy rich.

Now, in 2014, I see the harmful impact of the vast divide between rich and poor manifest itself starkly in my job as Headteacher of Huntington, the largest school in York.

It is a truly comprehensive school. We have the full range of students, from Professors’ daughters to students from some of the worst socio-economic backgrounds in the country. Proper poverty.

As the gap between the rich and poor widens I see more students on free school meals, more students whose parents buy second-hand uniform and more parents who need financial support for school trips.

And in the biggest school in York, a wealthy city in the sixth biggest economy in the world, when it rains hard, we put out 17 buckets to catch the water because the roof leaks and I can’t afford to repair it.

When it floods on the Somerset levels, money is no object… when it floods in our school it’s a different story.

In one of the most unequal societies in the developed world, it is tougher than it has ever been for a council house boy like me to make it to the top of the professions.

To conclude, our country doesn’t have to be like this. The world’s top-performing jurisdictions don’t allow those who can afford it to barricade themselves behind educational enclaves.

Private education is virtually unheard of in Finland, in Shanghai, in most of Canada. These are societies striving to establish a meritocracy, to create social cohesion, to provide opportunity for all. And, as our society splinters further, on social and racial and religious grounds, we should be aiming higher too – for all our citizens.

The final words on our country’s harmful educational elitism go to ex-Prime Minister Sir John Major – who went to a grammar school in South London – who said last year:

“In every single sphere of British influence, the upper echelons of power in 2013 are held overwhelmingly by the privately educated or the affluent middle-class.”

He continued, “To me, from my background, I find that truly shocking.” Mr President, ladies and gentlemen, I couldn’t agree more

I beg you to propose the motion.

When the debate is over, if you are in favour of the motion you exit via the Ayes door and if you are against you leave through the Nayes door. The tillers count up the Ayes and the Nayes and the President declares the outcome in the Gladstone Room. We lost the debate 60-78.
I loved every minute of it! Early in the evening I stood in the Members Only William Gladstone Room and said to myself, Take this in, every second, because in a couple of hours it will be a memory only.
I prepared more thoroughly than anyone would imagine. No output without input. We had eight minutes. That focused my mind. I was determined not to run over – the Union Secretary rings a bell if you don’t finish on time. I practised with our Senior Citizens Link Group the afternoon before, which was great – they’re a tough gig for sure! And my wife, boys and PA Kate all had to endure me orating at them. The thing is, on the night, all that preparation meant I was (almost) word perfect and I enjoyed myself beyond measure. And there were no bells.
Precision matters. Working hard on an argument until it is word perfect is one of the more gratifying things to do in life. Ruth Kennedy and Geoff Barton were wonderful editors/co-contributors. I made sure that I addressed the motion, something clear from this top twenty words Wordle of my speech:

We were treated with tremendous courtesy. Philippa, Ben, Sacha, Leo, David and the rest could not have been more welcoming.
The experience was awesome. Thinking of the famous figures from world history who had spoken from the very same spot where I stood made the event awesome in the true sense of the word. The fact that three Huntington students now studying at Oxford, Luke, Lydia and Natalie, were in the audience was a huge inspiration.
Two souvenirs for my mum – I managed to persuade one of the waitresses to pinch me a menu. The newspaper has, as you might imagine, generated much mirth… 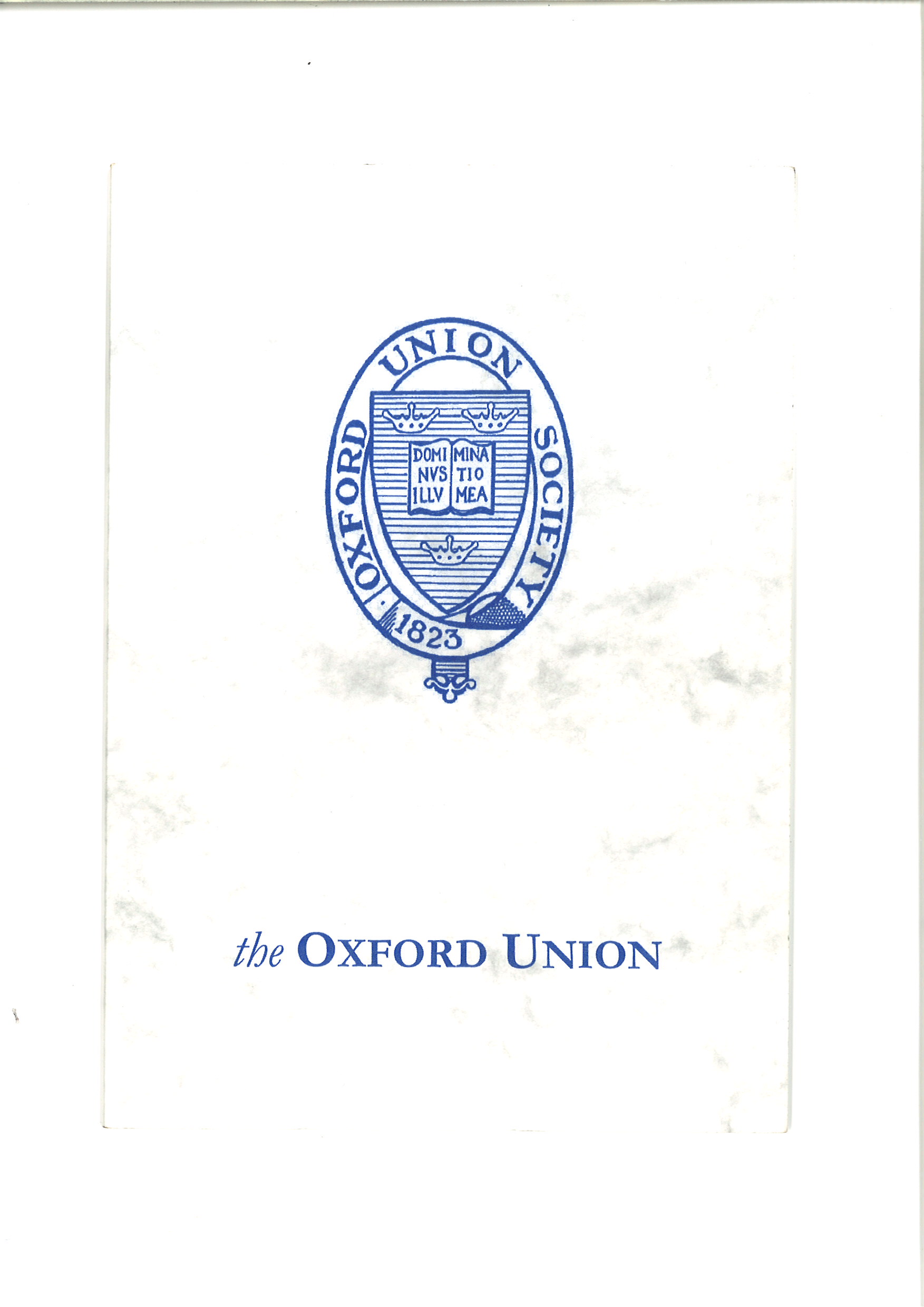 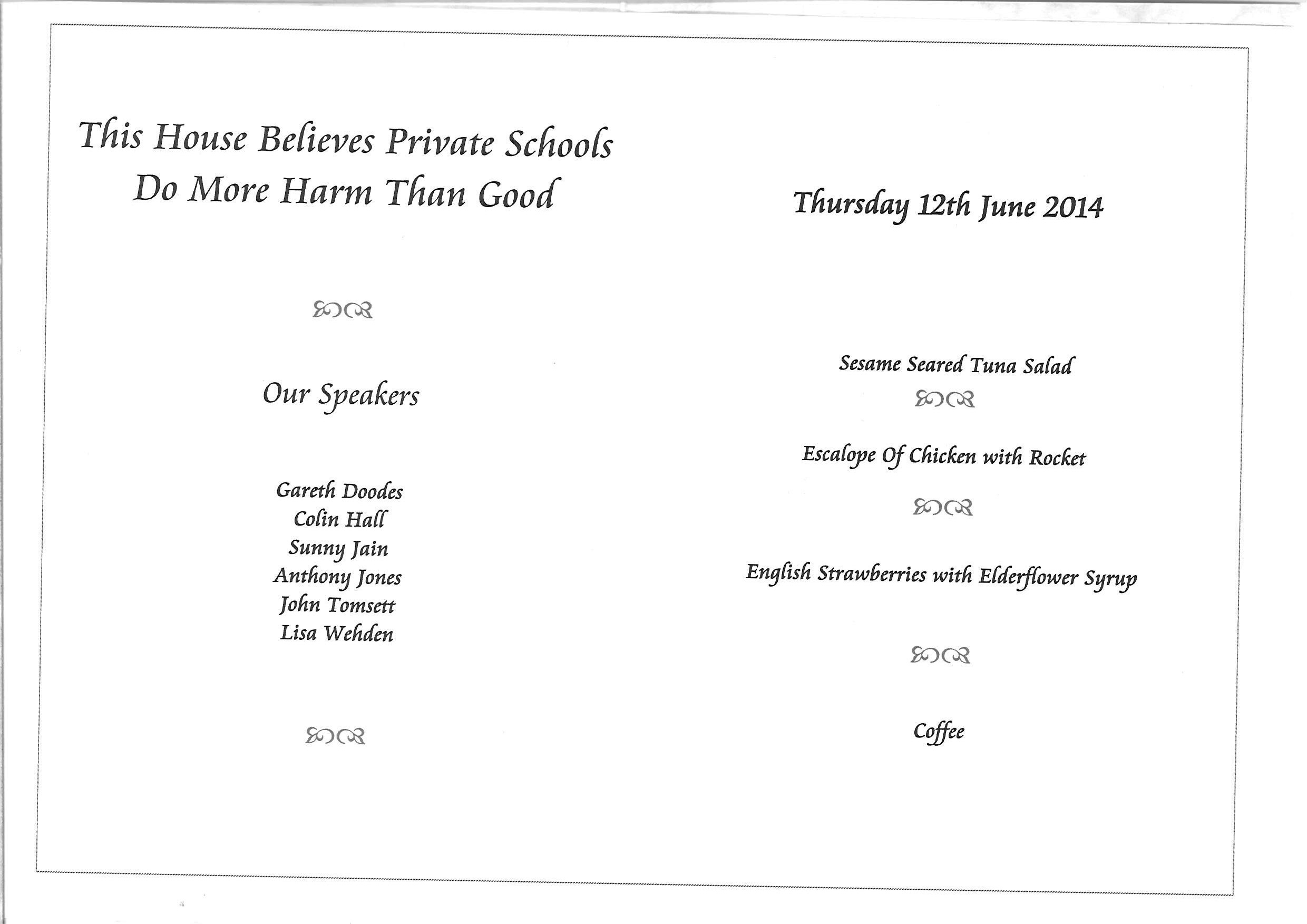 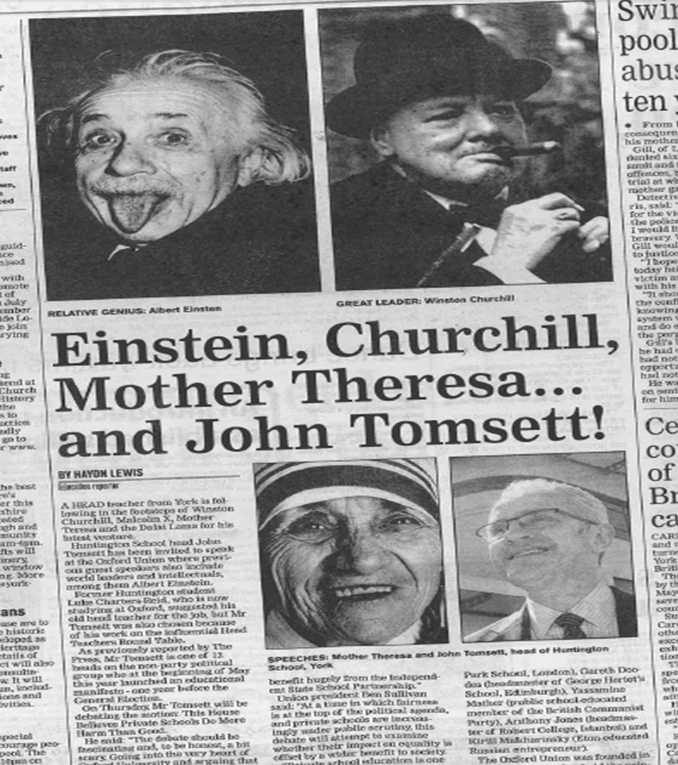