I have been a teacher for 30 years, a Headteacher for 15 years and, at the age of 54, this much I know about why Christine Counsell is right about teaching knowledge and cultural capital.

This post’s genesis lies in a recent Christine Counsell tweet in defence of RE education:

It interested me because I teach “War Photographer” but, despite having a  Roman Catholic wife and children, I have never referenced transubstantiation once when teaching Duffy’s poem:

In his dark room he is finally alone
with spools of suffering set out in ordered rows.
The only light is red and softly glows,
as though this were a church and he
a priest preparing to intone a Mass.
Belfast. Beirut. Phnom Penh. All flesh is grass.

He has a job to do. Solutions slop in trays
beneath his hands, which did not tremble then
though seem to now. Rural England. Home again
to ordinary pain which simple weather can dispel,
to fields which don’t explode beneath the feet
of running children in a nightmare heat.

Something is happening. A stranger’s features
faintly start to twist before his eyes,
a half-formed ghost. He remembers the cries
of this man’s wife, how he sought approval
without words to do what someone must
and how the blood stained into foreign dust.

A hundred agonies in black and white
from which his editor will pick out five or six
for Sunday’s supplement. The reader’s eyeballs prick
with tears between the bath and pre-lunch beers.
From the aeroplane he stares impassively at where
he earns his living and they do not care.

The guest revision lesson I teach across Year 11 is essentially an hour’s lecture which gives the background to the poem. I don’t really touch on the poetic techniques; rather, I explain exactly what the poem means on a quite literal level. I do not venture much beyond the denotative; connotative interpretations of the text, such as the parallel between the photographic development process and the bread and wine of Holy Communion I leave to the students’ main English teacher. The lesson and all its resources are available on my blog.

But, back to Christine Counsell. Our twitter conversation contrasted her intellectual grasp of the poem on a relatively profound level and my more prosaic approach to teaching the poem and its utterly clear reference to Don McCullin, one of our more revered war photographers. I replied to her opening tweet thus: 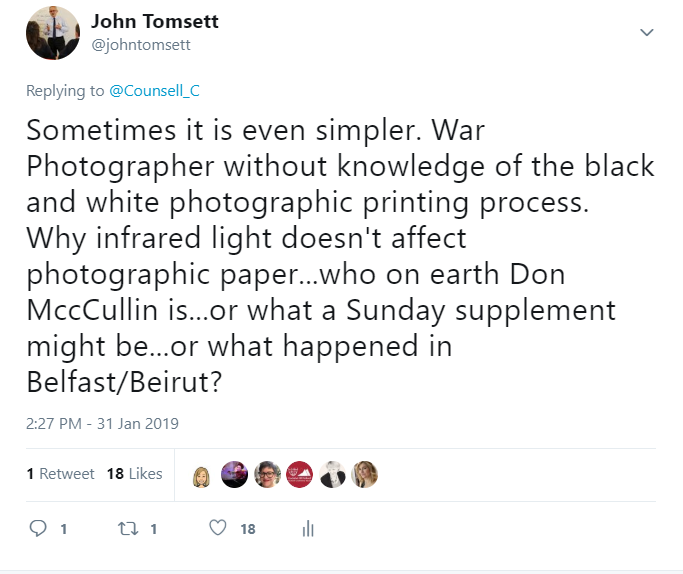 Christine’s subsequent tweets are excellent in interpreting the poem: 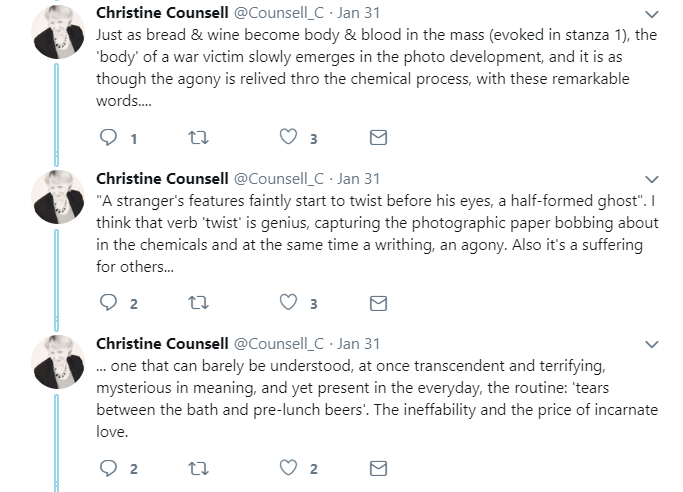 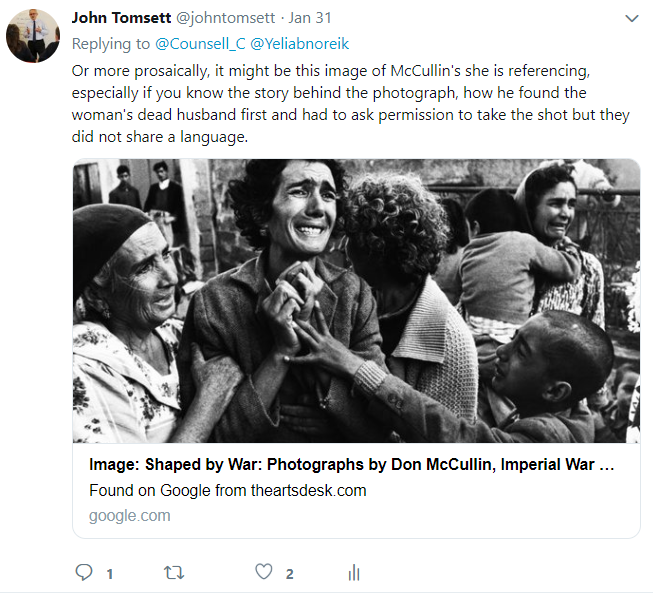 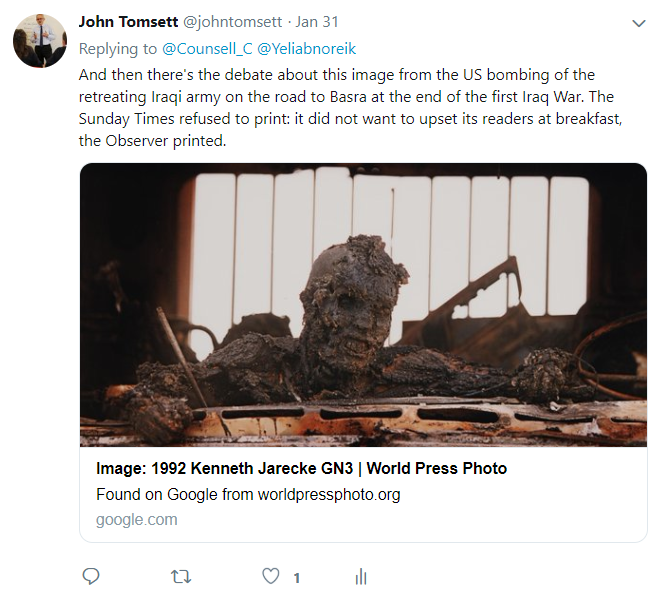 To begin I asked a student I knew which was his favourite of the AQA Power & Conflict selection of poems they study for the exam. He replied “Ozymandias, because it’s the least boring” grinning around the room for his appreciative audience. And at that point I allowed myself a little rant, about how I don’t understand why students are proud to display their lack of interest in poetry, keen to parade their disdain for learning about stuff; rather, I wish that they would show how much they knew, that they would talk about how Shelley’s poem has accompanied news of the fall of many a dictator over the years, Saddam Hussein and Colonel Ghaddafi most notably, and how even the makers of Breaking Bad named a seminal episode Ozymandias as Walter White’s empire began to disintegrate, and how it is a brilliant reminder to anyone who gets above his or her station that we will all die in the end of things and that we cannot take anything with us and that nothing really means anything in the scheme of things, and how the reader is, perhaps, the fifth or sixth person involved in the poem, because you have Ozymandias himself, the stone mason who carved the statue, and then the traveller and then the speaker in the poem and then Shelley and then the reader… and I went on until my flurry of frustration blew itself out. My rant built to an OTT climax about how it feels to work in a world where students are proud not to be interested in ‘the best that has been thought and said’. I managed, self-deprecatingly, to make them laugh. I apologised for my faux histrionics. And then I taught the lesson.

But I had to explain everything. I had to explain what a Mass was. Who Roman Catholics were. Christine Counsell’s transubstantiation. What happens at a baptism (because, like the multiple assassination scene at the end of The Godfather, the link between hands, water, careful preparation, gentle handling, being newly born, created from nothing and returned to nothing are too obvious to dismiss). What happened in Belfast, Beirut, and Phnom Penh. The source of “All flesh is grass” and its meaning. The photographic printing process. Why “dust” relates to death in the funeral service. What a Sunday supplement looks like. Don McCullin. Vietnam. Rural England.

It was an illuminating lesson in how important it is to give our students the cultural capital they lack. If they don’t know what all this means on a literal, factual level, they cannot begin to discuss the link between the content of the poem and Duffy’s poetic art. Instead they will begin making stuff up and stray beyond, what I call, the perimeter of justifiable interpretation because too often they think, mistakenly, that a poem is a difficult mystery to be solved.

We have a moral responsibility to teach our state school students all that they don’t know. How else are students like the one who finds poetry boring going to find out about stuff? I know how that makes me sound, but here’s an anecdote that sheds light on the social mobility challenge our students face, an anecdote I have never forgotten. At the end of his first year at Durham, my son was returning from his boozy end of year college football team tour. He sat between two close mates on the flight from Kraków, one who went to Eton and the other who went to St Paul’s. My son was watching Youtube videos of US basketball; his mates were reading The Economist and Stephen Hawking’s A Brief History of Time respectively. As Christine Counsell says, our knowledge alters what we see…

My week ended on a high note. One of the students from the Ozymadias group came up to me in the dining hall where I was on Friday lunchtime duty and told me she had seen something about Don McCullin on TV. She suddenly had cultural capital and had, according to her, displayed her cultural capital to her parents by explaining all about Don McCullin and where he had taken photographs and how he hated being known as a war photographer.

He has an exhibition, she went on, in London.

It’s my half-term treat, I replied. And we both smiled. 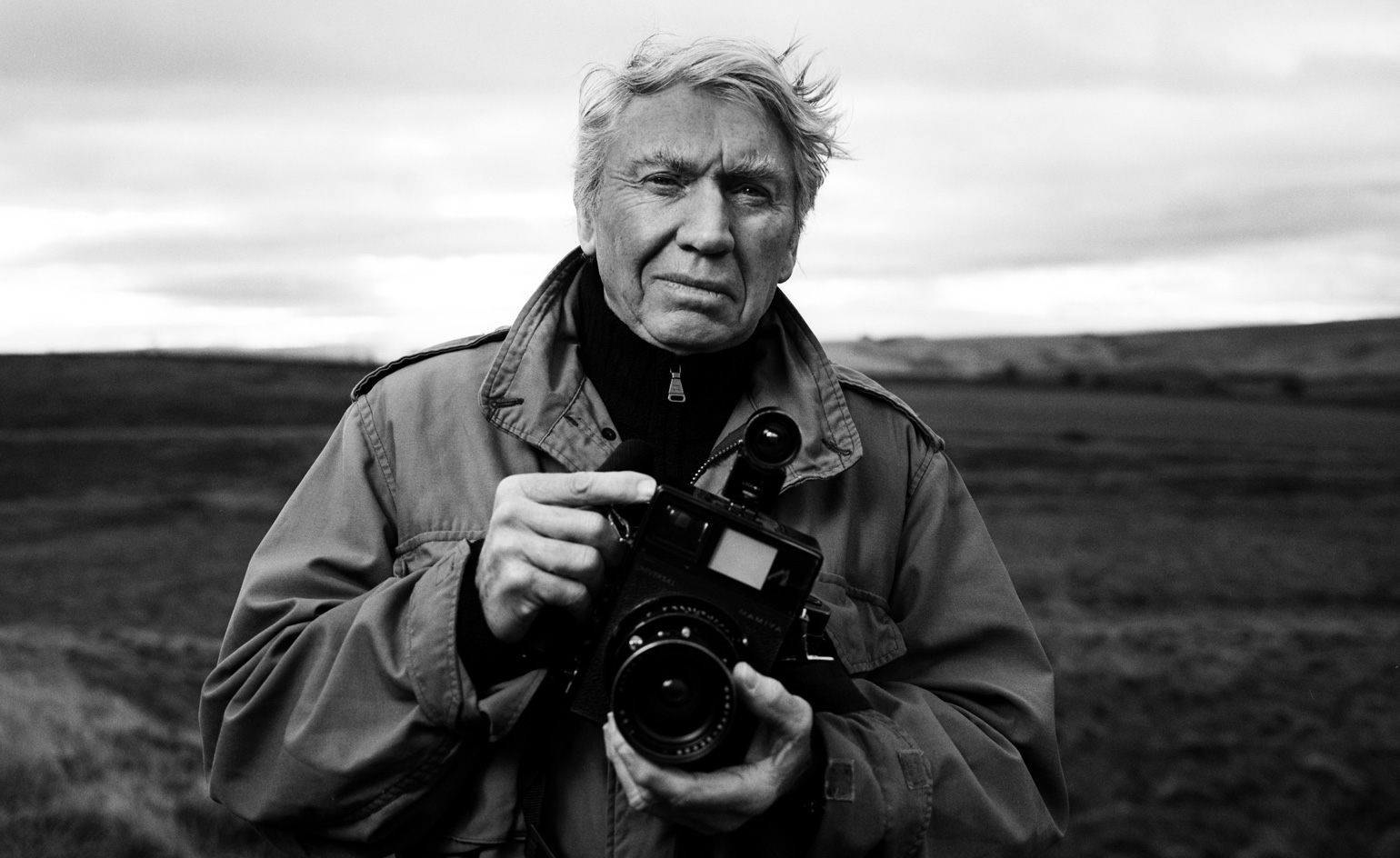